Tsarnaev pleads not guilty to attack

The 19-year-old Chechen spoke clearly in court, repeatedly answering that he was "not guilty" of charges that he killed three people. 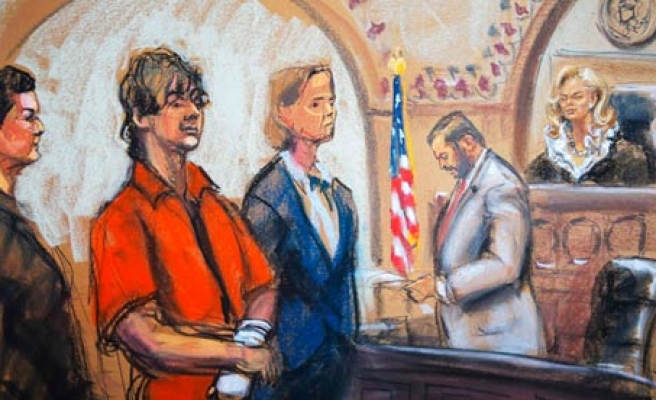 Accused Boston Marathon bomber Dzhokhar Tsarnaev pleaded not guilty to committing the worst mass-casualty attack on U.S. soil since 9/11, a crime that could bring the death penalty.

The 19-year-old ethnic Chechen spoke clearly in court, repeatedly answering that he was "not guilty" of charges that he killed three people by setting off homemade pressure-cooker bombs, assembled by him and his older brother Tamerlan, on April 15 and later shot dead a university police officer.

That shooting, and a later gun battle with police in the suburb of Watertown, Massachusetts, led to the death of 26-year-old Tamerlan Tsarnaev and a day-long lockdown of most of the Boston area as police searched for Dzhokhar. He was found, badly wounded, hiding in a boat in a backyard.

The marathon attack injured about 264 people, with many losing their legs.

Tsarnaev's appearance was the first time he has been seen in public since his April 19 arrest. He appeared in court on Wednesday dressed in an orange prison jumpsuit, with his hair long and unruly and his left arm in a cast.

He looked around the courtroom, watching prosecutors as they spoke and occasionally glancing back at survivors of the attack and victims' families in the gallery.

The biggest challenge for Tsarnaev's attorney, public defender Miriam Conrad, will be sparing him the death penalty, observers said.