Authorities refuse to speculate about why the tunnel was built and by whom. 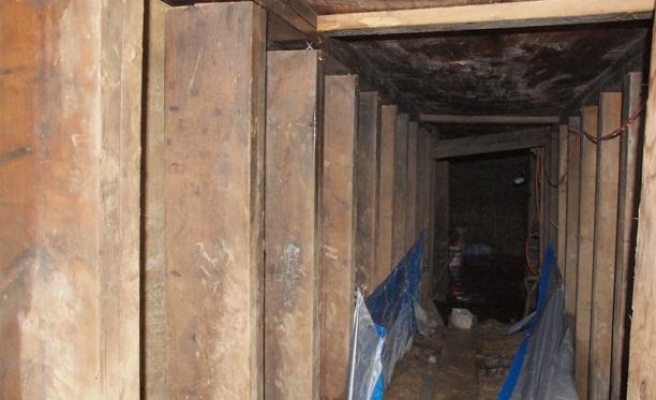 Authorities on Tuesday asked the public’s help in determining who dug a mysterious tunnel discovered near a future site of the Pan Am Games in Toronto.

Police refused to speculate about the purpose of the tunnel, but it was discovered in a “very secluded area … it was a densely forested area,” said Toronto Deputy Police Chief Mark Saunders at a press conference. “The investigation is still ongoing. Who built it? Why they built it? What were their intentions?”

The tunnel was near Toronto’s York University Keele Campus and the Rexall Centre, which will host the tennis competition during the upcoming Pan Am Games.

It was constructed with “some level of expertise” with plywood and 2-by-8 lumber and was 33 feet long, 6 feet 4 inches in height and 2 feet 10 inches wide, Saunders said. It likely took weeks to build, he added.

“It looked like it would take more than one person to develop this,” he said.

The tunnel was discovered by a police officer in mid-January who noticed a wooden latch beside a dirt pile. Upon investigation, he found a large piece of wood concealing the entrance.

The reason for the tunnel has baffled police and the press conference was called to ask anyone with information about the tunnel to come forward.

The dirt was removed by buckets, dumped in a wheelbarrow and discarded, Saunders said. Food and drink containers were also found.

There was also a small rosary with a Remembrance Day poppy hung on one of the tunnel walls. Remembrance Day is observed Nov. 11 in Commonwealth nations to honor armed forces members who have died in the line of duty.

Saunders said steps had been taken to quiet the sounds made by the generator and the temperature in the tunnel was “very comfortable” so the work could have been going on through the winter.

The deputy police chief took great pains to avoid any link between the tunnel and terrorism, going so far as to say that building a tunnel is not a criminal offense. The tunnel has since been filled in.

Saunders said there is heavy security in place for the Pan Am Games, which is scheduled to run July 10-26 and will be held at 30 venues in the Toronto area. Organizers expect to draw 7,500 athletes, 4,000 members of the media and 1.4 million spectators. There are 23,000 volunteers to help with the games.