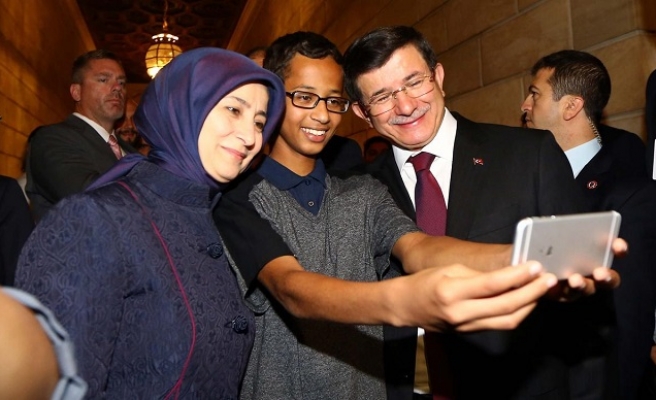 Turkish Prime Minister Ahmet Davutoglu met Friday with the U.S. Muslim boy who was arrested after a teacher mistook his homemade clock for a bomb.

Davutoglu welcomed Ahmed Mohamed, 14, in New York at an event organized by the Turken Foundation, which helps Turkish students in the U.S. Davutoglu is in the city for UN meetings.

Ahmed's father, Mohamed Elhassan Mohamed, told Anadolu Agency the family was grateful for Turkey’s support. “What happened to my son is something ridiculous,” he said. “You accuse a Muslim because he is a Muslim. We need all this Islamophobia to stop.”

The student took a "selfie" with the Turkish premier and his wife Sare.

Ahmed, whose family are from Sudan, made international headlines when he was handcuffed, arrested and fingerprinted by police on Sept. 16 after a homemade clock he brought to the school was mistaken for a bomb.

The incident took place at a time when rising Islamophobia has exacerbated the debate around religious freedom in the U.S.

His arrest was widely criticized and the charges against him were eventually dropped. Ahmed received messages of support from a number of high-profile figures including President Barack Obama, who he visited at the White House.