With more than 1.3 million Ukrainians in Canada representing one of the largest groups of Ukrainians in the world, their votes are pivotal in the upcoming Canadian elections. 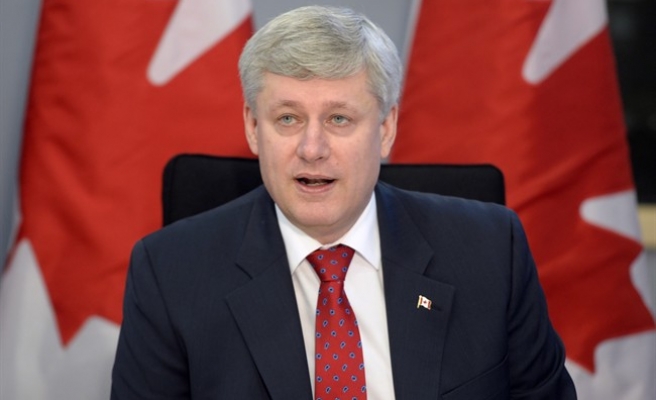 Prime Minister Stephen Harper's hard line against Moscow's aggression in Ukraine has earned him support from Canada's Ukrainian diaspora, a group that could be pivotal as he seeks a fourth mandate on October 19.

Harper's Conservatives are in a tight three-way race with the centrist Liberals and the leftist New Democrats for 338 seats in the next parliament. Several key races could be decided by Ukrainian-Canadian voters.

Canada's Ukrainians are the descendants of economic migrants who first came to the country 125 years ago, and in subsequent waves after World War II and over the last decade.

Today they number 1.3 million, or almost four percent of the population. It is one of the largest groups of diaspora Ukrainians anywhere, and they represent a considerable voting bloc.

"The Tories established that the Ukrainian vote could tilt the results in a dozen tight electoral races in Canada," said Dominique Arel, the chair of Ukrainian Studies at the University of Ottawa.

In 2011, the Tories targeted voters in 35 electoral districts across Canada with more than 10,000 voters of Ukrainian descent -- and they won "most" of the races, Arel said.

These included electoral districts in Winnipeg, Manitoba, where the descendants of Ukrainian migrants represent 13 to 21 percent of the population.

The Conservatives also won a seat in Etobicoke Centre in Toronto, where seven percent of the population is Ukrainian-Canadian, by six votes -- a victory confirmed by the Supreme Court of Canada after a review.

This round, the Liberals and the New Democrats realized the importance of this key group and also set out to woo them, Arel said.

Their respective pro-Kiev stances, however, differs little from that of the Tories, said Taras Zalusky, head of the Ukrainian Canadian Congress.

According to Roman Zakaluzny, president of the Ukrainian Canadian Civil Liberties Association, Ukrainian-Canadians share plenty of views on topics like the economy and social issues with their fellow countrymen.

"Ukrainians Canadians don't only vote with Ukraine in mind when they vote in federal elections," he said. "I think primarily Canadian issues are what concerns them. That said, they do listen to what politicians are saying about Ukraine and that probably does factor into their vote."

According to Arel, "what's really changed is that Ukraine has become an international crisis and it is being watched closely by the Ukrainian diaspora in Canada."

Ukrainian issues now play a much bigger role for voters with that heritage "because the country of their ancestors, their relatives are under invasion," Zakaluzny said.

"I think this will be a factor much more than before," he said.

The Harper government's tough stance on Moscow -- the toughest arguably of any G7 nation -- has given it an edge at the ballot box.

Russian President Vladimir Putin got an icy reception at a G20 summit in Brisbane last year where Harper asked Putin, as he shook his hand, to "get out of Ukraine."

"That resonated back in Canada," Arel said.

Harper has often said that Canada's position "remains clear: we recognize the sovereignty and territorial integrity of Ukraine and will never recognize the illegal Russian occupation of any part of the country."

With Can$700 million in humanitarian aid and military training for Ukraine, and a free trade agreement signed by Ottawa and Kiev in July, as well as 15 rounds of sanctions levelled against Moscow, "no other nation, no other government in the world has supported the Ukrainian people as much as Canada," Harper said recently during a leaders debate.

These actions are easier to take since Canada "has much fewer economic interests in Russia than France or Germany," which has resulted in "more emphasis on domestic concerns, electoral and maybe even ideological" concerns in drafting measures aimed at punishing Putin, said Arel.

This earned Harper one of the biggest endorsements so far: support from former hockey star Wayne Gretzky, whose grandfather immigrated from Ukraine.