Ultra-Orthodox Jews refuse to sit next to women on plane

One passenger said that the group had even told her to sit away from her husband, which she refused. 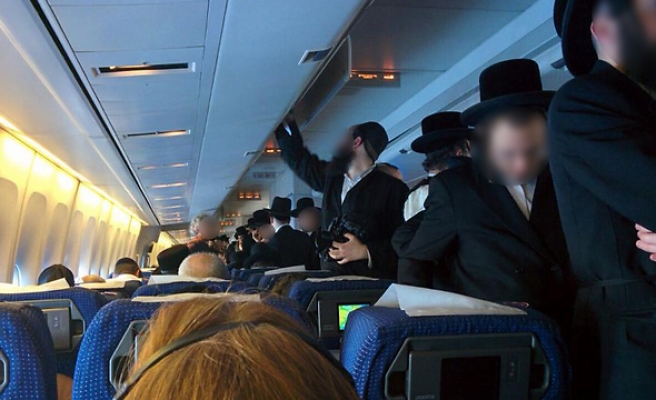 Hundreds of ultra-Orthodox Jewish men caused a delay to an Israel-bound flight from New York on Wednesday morning after demanding passengers re-arrange their seating because they refused to sit next to women.

Ynet News reported that the group was traveling to Israel in order to celebrate the Jewish New Year there when they boarded the El Al flight at 5 A.M. local time.

The demand of the group not only delayed the flight, but caused chaos to unfold on the plane itself when they blocked the aisles, forcing the flight's captain to announce over the PA system that the flight would not take off as long as people were standing.

"Although everyone had tickets with seat numbers that they purchased in advance, they asked us to trade seats with them, and even offered to pay money, since they cannot sit next to a woman. It was obvious that the plane won't take off as long as they keep standing in the aisles," Amit Ben-Natan, a passenger on the plane, told Ynet News.

Another passenger said that the group had even told her to sit away from her husband, which she refused.

El Al has promised to investigate the incident, saying "El Al does everything it can to give its passengers the best possible service year-round. These days bring with them a peak in air traffic to Israel, and our crews on the ground and in the air are doing the best they can to address the needs and requests of all our travelers while trying not to fall behind schedule.