UN assemly opens with call for action on refugee crisis

Ban Ki-moon called on Europe to do more to confront the refugee crisis, in his opening address to the General Assembly meeting of world leaders 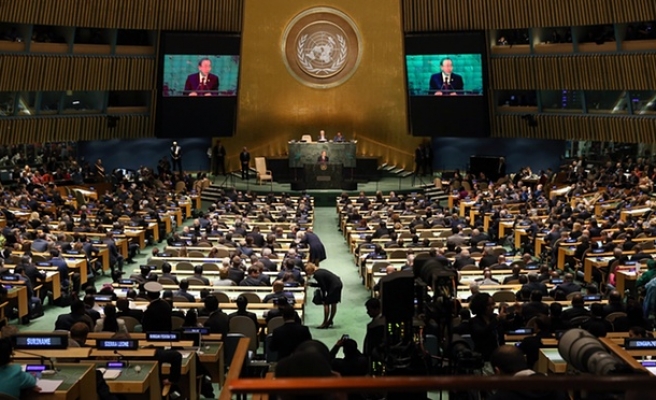 UN Secretary-General Ban Ki-moon on Monday called on Europe to do more to confront the refugee crisis, in his opening address to the General Assembly meeting of world leaders.

"I urge Europe to do more," Ban told the 193-nation assembly.

Europe's worst refugee crisis since World War II looms large over this year's gathering of world leaders as international efforts to end the war in Syria are in disarray.

"We should not be building fences or walls, but above all we must look at root causes, in countries of origin," said Ban.

More than four million people have been driven from the homes in the four-year war in Syria, with hundreds of thousands heading to Europe, pouring out of overcrowded refugee camps in Jordan and Turkey.

Ban is due to host a meeting on Wednesday on the sidelines of General Assembly on the refugee crisis to agree on a global response as the European Union struggles to overcome divisions over the way forward.

Turkish Prime Minister Ahmet Davutoglu, whose country has taken in some two million Syrian refugees, will open the meeting that coincides with intense diplomacy to address the war in Syria.

The European Union last week agreed to inject $1 billion to UN relief efforts in Syria's neighboring countries, but Ban said more should be done to ensure that the refugees are treated with dignity.

Ban has expressed his outrage over the treatment of refugees in Hungary, where the government has sealed off the border with Serbia and police have used water cannons to push back refugees.

Hungary has also made border-crossing a crime punishable by up to five years in jail.

In his address, Ban appealed for more funding of UN relief efforts, which he said was "not broken. It is broke."

"We are not receiving enough money to save enough lives," he said.

UN appeals for Iraq, South Sudan and Yemen have received about half of the funds needed and only a third of the money requested for Syria has been pledged.