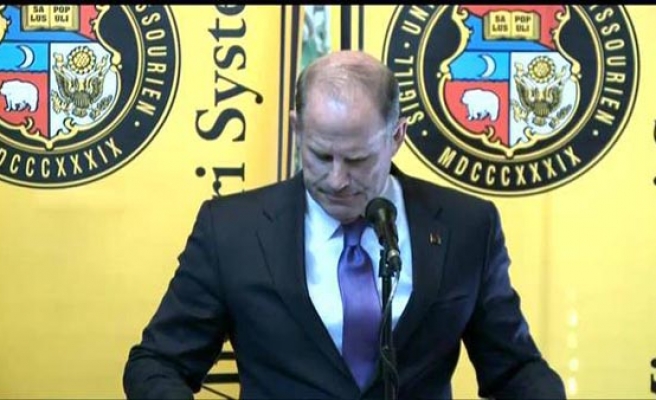 A U.S. university president stepped down Monday following weeks of protests for his handling of a series of racially charged incidents.

"We stopped listening to each other, didn't respond," Wolfe said. "Use my resignation to heal, and start talking again."

He said he took full responsibility for the frustration on campus.

Those frustrations were fueled beginning last month when white students reportedly yelled racial slurs at black students, one of whom was the university’s student body president. The incident prompted protests over Wolfe's denial to take action.

In October, a black student group reported slurs were hurled at them by an apparently drunk white student. Later, someone used feces to draw a swastika, drawing condemnation from black student organizations, according to local media.

Demands for Wolfe’s resignation grew louder in recent days as the school's black football players said Saturday that they would not participate in team activities until the president was removed from his position.

The financial cost to the school for forfeiting the team’s next game against Brighman Young University would have been $1 million, according to a copy of the contract between the two universities that was posted by The Kansas City Star newspaper.

In a Nov. 2 letter to the school leaders, Butler made reference to "a slew of racist, sexist, homophobic, etc., incidents that have dynamically disrupted the learning experience for marginalized/underrepresented students at the University of Missouri” since Wolfe took office in 2012.

According to the school's website, minorities make up 17 percent of the 35,000-member student body.

"The lack of leadership Mizzou has been dealing with for months has finally reached the point of being a national embarrassment. It’s time for a change in leadership and start the healing process," one representative said in a statement, according to the Missouri Times.