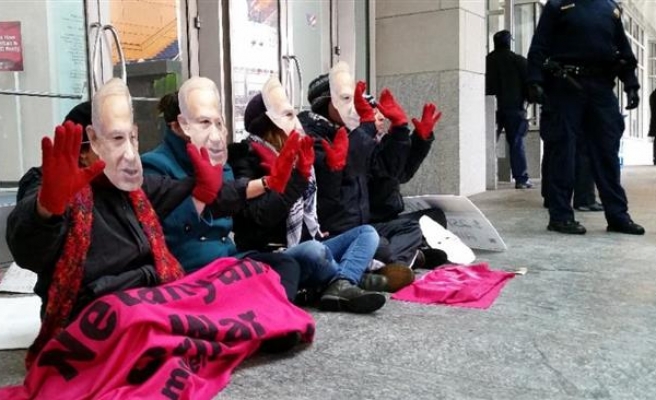 World Bulletin / News Desk
Five activists were arrested Sunday in the American capital while demonstrating at the annual policy conference of the American Israel Public Affairs Committee, a well-known pro-Israeli lobby in the U.S.

As one of the largest pro-Israeli gatherings, the AIPAC policy conference kicked off at the Washington Convention Center in Washington D.C. on Sunday, and will last for three days.

A group of protesters mobilized by an anti-war group known as CODEPINK or Woman for Peace on social media under the hashtag #ShutDownAIPAC tried to block the entrance to the convention center. Several civil society organizations including some Jewish ones joined the demonstration.

Some protesters were waving flags of Hezbollah, a proxy of Iran in the Middle East, and iisted as a terrorist organization by the U.S., as the conference is expected to make specific emphasis on pressing Iran to stop its nuclear program as well as increasing sanctions on the country.

"The purpose of the rally was to draw attention to this organization's role as a special interest lobby that maintains a dangerous stranglehold over U.S. policies and diverts U.S. tax dollars from American needs and into Israeli militarism," read a statement by the CODEPINK.

The activists were removed by police from the front of the Washington Convention Center while chanting: “Netanyahu, War Criminal! Free, free, Palestine!”

"We're here to say that this organization is on the path of war," one of the protest organizers, Medea Benjamin, who is also a Jew, told The Anadolu Agency.

“In a time when delicate negotiations are under way with Iran, it’s irresponsible and dangerous for this organization to be pushing for more sanctions on Iran, which would completely derail the nuclear talks," she said.

A member of an orthodox Jewish organization, Jews United Against Zionism, Rabbi Israel David Weiss told AA: "We came here to let the world know that, although this organization presents itself as representative of American Jewry and of course, the state of Israel, the so-called Jewish State," he said. "It doesn't represent Judaism in any manner, shape and form."

He added that Zionists have gone against Judaism by killing and oppressing people, as well as by seizing their lands in the name of Judaism.

Sierra Ramirez, who was among those arrested, said that she was there because she opposed the continual flow of American tax money to Israel and this organization's influence on the U.S. foreign policy.

The  conference is taking place at a time when the U.S. accompanied by five other world powers, have been negotiating for an agreement with Iran on its nuclear program, with a deadline in March.

It also is taking place ahead of Israeli Prime Minister Benjamin Netanyahu's speech at a joint session at the U.S. Congress. The speech has been hotly debated both in the U.S. and Israel because the prime minister was invited by the Republican House Speaker John Boehner rather than the White House.

President Barack Obama attended to the conference himself last year, but he will not join it this year. White House National Security Advisor Susan Rice and  Samantha Power, U.S. Ambassador to the United Nations, will attend the conference.

Dozens of Congressmen as well as Vice President Joe Biden, as the president of the Senate, will not attend Netanyahu's speech.

“With the politicization of Prime Minister Netanyahu’s speech and the growing divide between Democrats and Republicans over Speaker Boehner's invitation to the foreign leader, now is the time to confront the influence of the Israel lobby,” said CODEPINK organizer Anna Kaminski.

More demonstrations are expected to take place on Monday and Tuesday during Netanyahu’s tour in Washington DC.