Countries such as China, Iran and Russia have spent recent years adjusting their forces and fielding equipment designed to counter one of the US's greatest military strengths 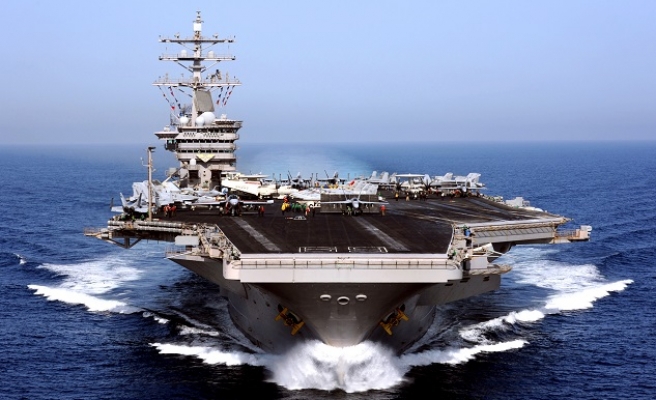 The U.S. aircraft carrier fleet may soon lose its unquestioned superiority over other militaries, the Center for a New American Security report said Monday.

Countries such as China, Iran and Russia have spent recent years adjusting their forces and fielding equipment designed to counter one of the United States' greatest military strengths.

The report, titled "Red Alert: The Growing Threat to to U.S. Aircraft Carriers," centers around China's burgeoning military posture in the Pacific and on a term that is starting to appear with an ever-increasing urgency in defense circles: anti-access/area denial, or A2/AD. Currently A2/AD strategy implies an integrated system of surface-to-air missiles, anti-ship cruise missiles, submarines, surface ships and aircraft all designed to push enemy forces as far away as possible from strategically important areas.

The report focuses on China's capabilities because of its "emphasis on long-range anti-ship missile procurement." This, coupled with its growing tech base, qualifies China as the "pacing threat" to the U.S. military. China, however, is not the sole architect of an A2/AD strategy designed to deter U.S. operations.

In the Baltics, Russia's naval base in Kaliningrad is known to house a sophisticated air defense network and anti-ship missiles. NATO commanders also have warned of Russian A2/AD buildup around Syria, as Russia has moved advanced surface-to-air missiles into its airbase there as well as a flotilla of ships with robust anti-air capabilities.

As other countries focus on creating sophisticated A2/AD bubbles by using new technology such as drones, advanced missiles and newer aircraft, the U.S. — by operating as it always has — is putting itself more at risk. According to the report, this is particularly relevant as carrier groups have reduced their long-range strike ability in lieu of being able to fly more air missions but at shorter ranges.

While the report discusses possible countermeasures for a sophisticated A2/AD network, including the Navy's future railgun project, the U.S. probably would employ a variety of systems and strategies, including hacking, to defeat the enemy threat. However, long-term strategies suggested in the report include putting U.S. combat power into systems such as submarines and long-range carrier-based drones. Submarines could evade A2/AD by remaining undetected, while carrier based drones — with their increased range — would give carriers much-needed standoff from potential A2/AD threats.

The U.S. "must re-examine the relevance of the carrier and its air wing and explore innovative options for future operations and force structure," the report concludes. "If the United States is to maintain its military superiority well into the future, it cannot afford to do otherwise."