US calls for more pressure on Syria

Clinton said the "real trick" was to convince "the Europeans and the Arabs and the Chinese and the Indians and others" to do more. 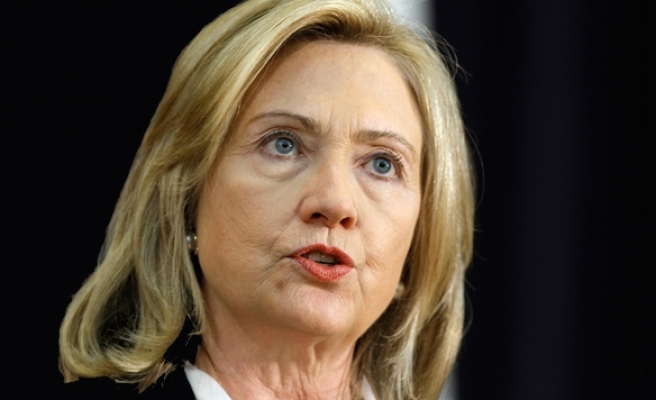 U.S. Secretary of State Hillary Clinton, asked why the United States has not yet called for Syria's president to step down, said Washington wants other nations to add their voices, according to an interview by the CBS Evening News with Scott Pelley released on Thursday.

The United States has been "very clear" in its statements about Syrian President Bashar al-Assad's loss of legitimacy, Clinton said, according to a transcript of the CBS interview.

"But it's important that it's not just the American voice. And we want to make sure those voices are coming from around the world," she said.

Clinton also said what was necessary to pressure Assad, whose government has unleashed a bloody five-month crackdown on protesters in cities across the country, was to sanction Syria's oil and gas industry.

She said the "real trick" was to convince "the Europeans and the Arabs and the Chinese and the Indians and others" to do more.

"We're going to sanction and we have been upping the sanctions. We're going to continue to do so," she said. "But we want others to follow, because Syria was not one of our major economic partners."

Clinton added that an organized opposition was also needed to pressure Assad. She said the United States has been encouraging the opposition to unite.

"There are Syrian opposition figures outside of Syria and inside," she said. "But there's no address for the opposition. There is no place that any of us who wish to assist can go."

On Wednesday Washington imposed sanctions on Syria's largest bank and on biggest mobile telephone company, controlled by Assad's cousin Rami Makhlouf, and on Thursday U.S. ambassador to Damascus Robert Ford said more sanctions would follow if the Syrian authorities did not stop their use of violence.

Regional powers Turkey, Saudi Arabia and Egypt have all put pressure on Assad to stop the violence. U.S. President Barack Obama and Turkish Prime Minister Tayyip Erdogan spoke on Thursday and agreed Syrians' demands for "a transition to democracy" must be met, the White House said.

Diplomats in New York quoted United Nations deputy political affairs chief Oscar Fernandez-Taranco as saying on Wednesday that nearly 2,000 Syrian civilians had been killed since March -- 188 since July 31 and 87 on Aug. 8 alone.

Syria says 500 soldiers and police have died in the bloodshed, which it blames on armed gangs and terrorists.