Nisha Biswal, assistant secretary of state for South and Central Asia, told a news briefing the political tension needed to be addressed internally, but the United States stood ready to help. 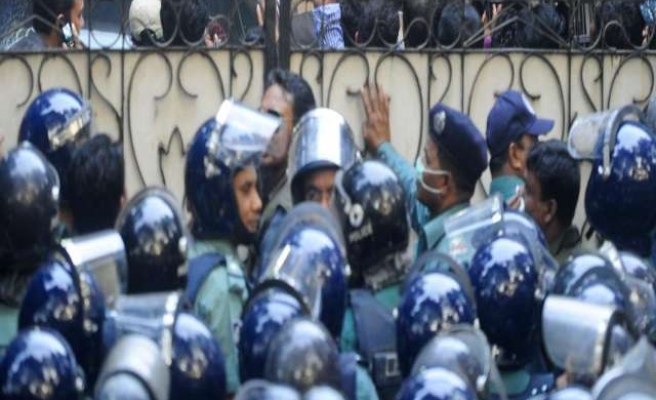 The United States hopes due process will be followed after an anti-corruption court in Bangladesh issued arrest warrants for former prime minister and opposition leader Khaleda Zia, the top U.S. diplomat for South Asia said on Thursday.

The warrants for Khaleda were issued on Wednesday, an action likely to increase tension fuelling anti-government protests in which more than 100 people have been killed in the past month.

Nisha Biswal, assistant secretary of state for South and Central Asia, told a news briefing the political tension needed to be addressed internally, but the United States stood ready to help.

"We do hope and expect there will be due process in terms of pursuing of any charges," Biswal said.

"It's also equally important that the government provides space for peaceful political opposition to be able to exist and to create an inclusive political processes," she said.

The anti-graft court's warrants were over cases in which Khaleda is accused of embezzling $650,000 during her last term as prime minister from 2001 to 2006. Khaleda is also facing charges of instigating violence.

Khaleda has denied the charges, calling them politically motivated. Her Bangladesh Nationalist Party stepped up protests last month, aiming to force Prime Minister Sheikh Hasina to step down and hold an election under a neutral caretaker administration.

Hasina has refused, instead tightening her grip by arresting opposition leaders and clamping down on critical media.

The Bangladesh government denied exerting any influence over the process, saying the warrants were issued only after Khaleda failed to appear in court on multiple occasions.

"There is no political intention of this present government to harass Begum Khaleda Zia," Iqbal Sobhan Chowdhury, a media adviser to the prime minister told Reuters.

"Now it is the responsibility of the law and order agency to execute the order of the court."

"For a peaceful political solution, the BNP must stop violence and killing," Chowdhury said. "Amid non-stop violence, a dialogue cannot be held."

Bangladeshi politics has been mired for years in rivalry between Hasina and Khaleda. Both women are related to former national leaders and have alternated as prime minister for most of the past two decades.