A lockdown on the US Capitol building has been lifted after shots were fired in the visitors centre, with the gunman injured and taken into custody. 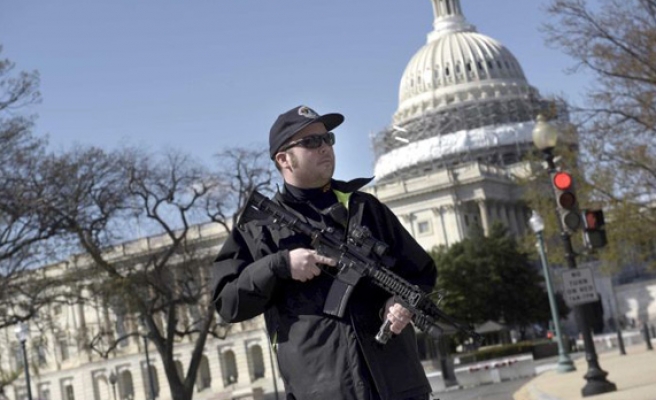 Police shot an armed man at an entrance of the US Capitol visitor center Monday, sparking panic during the busy spring tourist season in a city on heightened alert following terror attacks in Brussels.

The suspect, who police said was known to authorities, was hauled into custody and transported to hospital, where he underwent surgery. The incident was not believed to be terror-related.

A female bystander suffered what police said appeared to be minor injuries and was hospitalized.

The incident prompted an hour-long lockdown on Capitol Hill in the heart of Washington, where staffers and frightened visitors were ordered to shelter in place.

Congress is in recess this week for the Easter holiday, but it is a busy week for tourists in Washington, with the city's famed flowering cherry trees in full bloom. Many school groups visit the city during the week after Easter.

Verderosa said the suspect, who he did not identify, had entered a security checkpoint at the visitors center.

During a routine screening, he "drew what appeared to be a weapon and pointed it at officers. An officer fired and struck the suspect," Verderosa said, adding that a weapon was recovered at the scene.

"The suspect is currently undergoing surgery. His condition is unknown at this time," he told reporters.

No officers were injured in the incident and it was not yet clear how many of them had fired on the suspect, Verderosa said.

The visitors center -- where tourists go through security and begin their guided tours of the domed building -- remained closed to the public afterwards so police could pursue their investigation.

"We expect regular order of business tomorrow morning at the Capitol visitors center. So people can safely visit the United States Capitol and their member offices," Verderosa said.

Police cordoned off access to the Capitol building during the incident. An ambulance was at the scene.

Jeff Westbrock, a North Carolina resident who was visiting a sunny Washington with his family, was in the main lobby of the visitors center when the incident erupted.

He said Capitol police officers yelled for everyone to get down, and then tourists were directed into nearby rooms, away from the scene.

"We covered each other up, Capitol police told everybody to stay low, and they neutralized the situation and told us to go into the auditorium and to stay safe," Westbrock told AFP.

"They kept everybody calm and did a great job."

Sophie Kneschke, a tourist from Germany, said it had been a scare.

"We were actually sitting in the cafeteria, we were just about to leave when I just saw a security man running in the hall and I didn't think of anything bad until people told us to lie on the ground and don't move and everything," she said.

"I was pretty much in panic because I didn't know what was going on. We went with some employees of the building to an emergency exit and we stayed there until security men came and then we got evacuated."

The White House -- where thousands were attending the annual Easter Egg Roll -- was briefly on lockdown as well, apparently after someone tried to scale the fence, but the order was quickly lifted.

Heightened security measures have been in place in Washington since last week's attacks on the Brussels airport and metro, which killed 35 people.