A U.S. court set a November date for Arizona's appeal to a federal court blocking of some part of immigrant law. 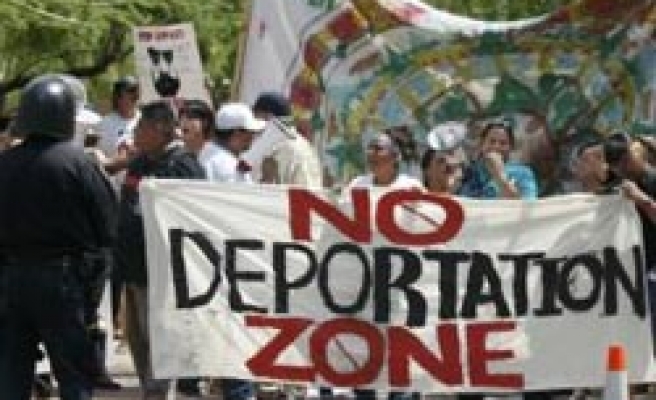 A U.S. court denied a request for an expedited hearing on Friday and instead set a November date for Arizona's appeal to a federal court ruling that blocked key parts of a state law cracking down on immigrants.

Lawyers for Arizona and Governor Jan Brewer had asked the 9th U.S. Circuit Court of Appeals in San Francisco on Thursday to lift an injunction blocking the most intrusive parts of the law, known as SB 1070, asking for the appeal to be handled quickly.

But the court denied the state's request to expedite the appeal and set a hearing for the week of November 1.

Tensions over the law have inflamed a decades-long national debate over immigration, which promises to play into the elections in November, when President Barack Obama's Democrats are fighting to retain control of Congress.

The appeals court on Friday set an August 26 date for Arizona's opening brief, with the government's response on September 23. The court said it would not grant any extensions of time to file briefs "absent extraordinary and compelling circumstances."

A spokesman for Governor Brewer did not immediately respond to a request for comment. The case was widely expected to go all the way to the U.S. Supreme Court.

The state's Republican-controlled legislature passed the law three months ago to try to drive nearly half a million immigrants out of Arizona, controversially boosting power of police on immigrants.

It drew 65-percent support in Arizona but faced a strong opposition from Obama and human rights groups.

Several hundred Hispanic and labor activists blocked streets and access to a jail in Phoenix on Thursday, after a weakened version of the law came into effect, and police arrested 71 people.

Protests against the law continued on Friday, when several activists were arrested in Maricopa County, according to local news reports. A rally by backers of the measure is set for Saturday outside the state capitol in central Phoenix.

Among blocked provisions of the law was one requiring a police officer to check the immigration status of anyone stopped or detained if the officer believed they were not in the country legally.

Immigrants would also have been required to carry their documents at all times and undocumented workers would have been forbidden to solicit work in public.