"President Hollande and I agree on the need to continue enforcing existing sanctions even as we believe that new sanctions during these negotiations would endanger the possibility of a diplomatic solution," US president Baracak Obama said. 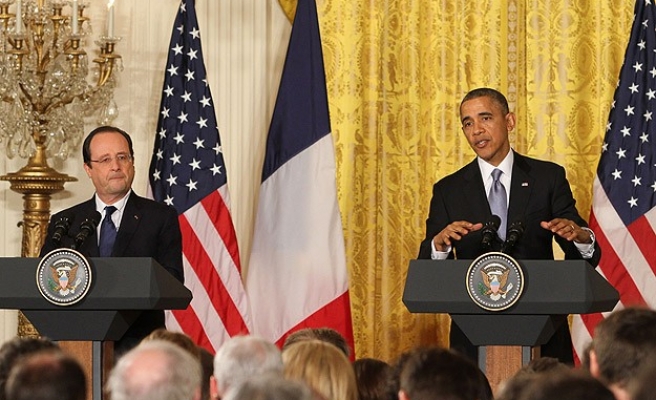 From Iran’s nuclear program to a potential free trade agreement, unity will continue to define the Franco-American relationship, according to the leaders of the two countries.

Speaking at a joint press conference at the White House with his French counterpart, U.S. President Barack Obama said, "This level of partnership across so many areas would have been unimaginable even a decade ago. But it's a testament to how our two nations who have worked to transform our alliance... I want to salute President (Francois) Hollande for carrying this work forward."

Hollande echoed Obama's sentiments, saying, "On all international issues, we have convergent views, and we stand united."

Concerning ongoing negotiations with Iran over its nuclear program, both leaders agreed on the need to continue enforcing existing sanctions, insisting that additional sanctions could derail the nuclear talks.

"President Hollande and I agree on the need to continue enforcing existing sanctions even as we believe that new sanctions during these negotiations would endanger the possibility of a diplomatic solution," Obama said.

Hollande agreed saying, "As far as sanctions are concerned, they will only be lifted if and when there is a definite agreement. And during this period of the interim agreement, they remain in force."

Iran and the P5 plus one - the U.S., France, Russia, China, U.K. and Germany - are set to resume negotiations in Vienna on February 18.

"Businesses may be exploring [if there are] some possibilities to get in sooner rather than later, if and when there is an actual agreement to be had. But I can tell you that they do so at their own peril right now because we will come down on them like a ton of bricks," he said.

Regarding Syria, Hollande said that ongoing peace talks between the opposition and government provide an opportunity for a political solution to the conflict, but more work is needed before a resolution to the nearly three-year old conflict can be reached.

Obama emphasized the need for increased humanitarian access inside Syria, while reiterating that there is not a viable military solution to the conflict.

The United Nations Security Council was on Tuesday set to debate a draft resolution to increase humanitarian access inside Syria.

Both Hollande and Obama emphasized the debate’s importance, with Obama saying, "This week we're working with our Security Council partners to call for an end to indiscriminate attacks on civilians and to ensure humanitarian aid workers have unimpeded access to Syrians in need."

On the economic front, the two leaders acknowledged that obstacles remain in reaching a free trade agreement between the U.S. and EU, but added that the two partners would continue to work together on the issue.

The potential economic upturn of an agreement cannot be understated, he said. "We need to get this done because an agreement could increase exports by tens of billions of dollars, support hundreds of thousands of additional jobs both in the United States and the European Union, and promote growth on both sides of the Atlantic."

Hollande cooled expectations for a speedy agreement, however, saying, "As long as principles have been set up, as long as mandates have been decided and the interests of everyone are known, speed is not of the essence. What we need is to find a solution."

He acknowledged that a speedy resolution would be preferable, "Otherwise there will be fears and threats."

France was the U.S.’s eighth largest trading partner in 2013, according to the White House.