Washington expressed its disapproval of India concluding defense and nuclear deals with Russia, also said it is troubled by the presence of the leader of the breakaway Crimean region in President Putin's delegation 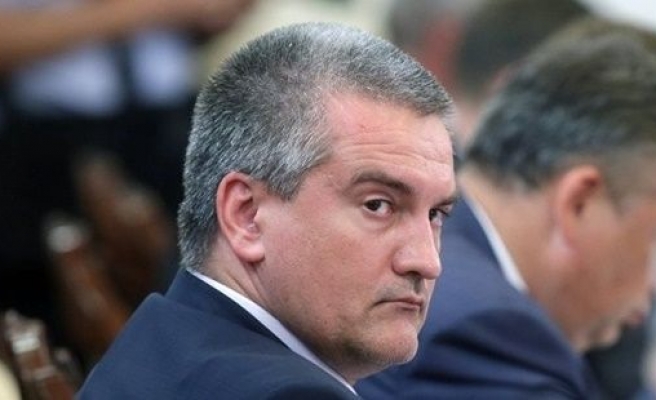 The Moscow-backed leader of Crimea, the former Ukrainian territory annexed by Russia, visited India on Thursday as a member of President Vladimir Putin's annual summit delegation, and the United States said it found the reports troubling.

India does not back Western sanctions against Russia, but the unofficial trip by Sergey Aksyonov could spoil the mood before Prime Minister Narendra Modi hosts U.S. President Barack Obama for India's Republic Day festivities in January.

State Department spokeswoman Jen Psaki said the United States was "troubled" by reports that Aksyonov may have been part of Putin's delegation and was seeking more information.

"We understand that the Indian Ministry of External Affairs have said they were not officially aware of his visit or his participation in the delegation ... We are seeking further clarification on that."

Psaki also referred to reports of new nuclear and defence deals between India and Russia and reiterated Washington's view that it was "not time for business as usual with Russia".

Aksyonov arrived at the upscale Oberoi hotel in New Delhi accompanied by Russian diplomats to be greeted by Gul Kripalani, a Mumbai-based seafood merchant who wants to boost trade with Russia.

Speaking to reporters after signing a memorandum of understanding to promote business, Aksyonov said his visit had "a private character" and he did not take apart in any official events.

He tweeted separately, however, that he had come to India as "a member of the delegation under the leadership of the president of the Russian federation, Vladimir Putin".

The towering 42-year-old, a former cigarette trader with little experience in politics, was elected in a closed session of the regional parliament after Russian forces in February took control of the Crimean peninsula in a bloodless operation.

He masterminded a quickfire referendum to join Russia that was recognised by Moscow. Kiev and the West say it was rigged.

It was clear that his visit enjoyed Russia's full diplomatic backing, with the consul general to Mumbai and an aide to Ambassador Alexander Kadakin present at the meeting and lunch with businessmen.

No Indian officials were present.

While the Indian foreign ministry spokesman said he was “not officially aware” of Aksyonov’s trip, it is unlikely that a foreign elected official could have arrived in India without official knowledge.

News of the event leaked out on Wednesday when the Russian embassy invited reporters to a signing ceremony only to cancel late in the evening.

A spokesman for India's Ministry of External Affairs said he was not officially aware of the Crimean visit. It is highly unlikely, however, that such an event would have taken place without New Delhi being in the loop.

"Even if India's options have increased, Russia remains our most important defence partner," Modi told reporters. No potentially awkward questions were allowed at the tightly stage-managed event held at an old princely palace.

India, which observes a policy of non-intervention, has refrained from criticising Moscow's takeover of Crimea and support for an uprising in eastern Ukraine that has killed more than 4,300 people since April.

Kripalani, who said his Pijikay Group has annual turnover of about 150 million euros ($190 million), signed the memorandum on behalf of the India-Crimean Partnership - a previously unknown group that he said represented five businesses.