US has no plan to take ISIL 'capital' 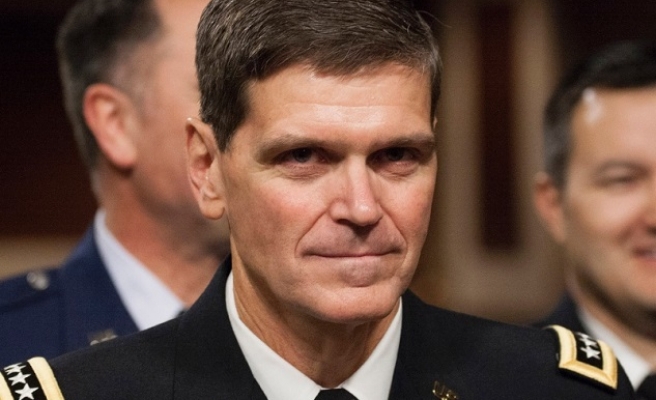 The commander of U.S. special operations said Tuesday that while coalition forces have put the ISIL group under pressure there is no immediate battlefield plan to take its de facto capital.

Briefing U.S. lawmakers in Washington, senior generals said the U.S.-led anti-ISIL coalition was working with local ground forces to isolate the group's Syrian stronghold in the city of Raqqa.

But General Joseph Votel, head of Special Operations Command, said this broad strategy does not yet amount to a plan to storm Raqqa, despite recent advances by U.S.-backed fighters grouped under the "Syrian Democratic Forces" banner.

"There is currently not a plan," he said.

General Joe Dunford, who is the U.S. military's highest-ranking officer, later told reporters that any move to retake Raqqa would be contingent on a variety of factors.

"We don’t have a timeline along which I would tell you that I know we are going to retake Raqqa," he said during a work trip to Florida.

Dunford pointed to recent gains in and around the town of Shadadi, which U.S.-supported local forces recaptured from the ISIL group last month, as evidence of momentum for an eventual recapture of Raqqa.

"This is all part of tightening the noose on ISIL in Syria," he said.

General Lloyd Austin, who currently heads the U.S. military's Central Command, which manages Middle East operations, told lawmakers it might be time to revisit a contentious program to train and equip groups of Syrian fighters to hold recaptured territory.

"I've asked for permission to restart the effort by using a different approach," Austin said, adding the revived program would focus on training smaller numbers of fighters.

The program attracted scorn after it emerged some trainees had given gear and ammunition to an Al-Qaeda-linked affiliate, the Al-Nusra Front.

Votel also faced questions from the Senate Armed Services Committee on the composition of the SDF units that the U.S.-led coalition relies upon for ground operations in the Raqqa area.

He said the group is "probably about 80 percent" Kurdish. The U.S.-led coalition has been criticized for its overreliance on Kurdish allies, who may struggle to win over civilians in a mainly Arab town like Raqqa and are considered suspect by neighboring Turkey.