The White House, State Department and Pentagon respond differently to reports that Turkish and American officials agree to a no-fly zone in northern Syria. 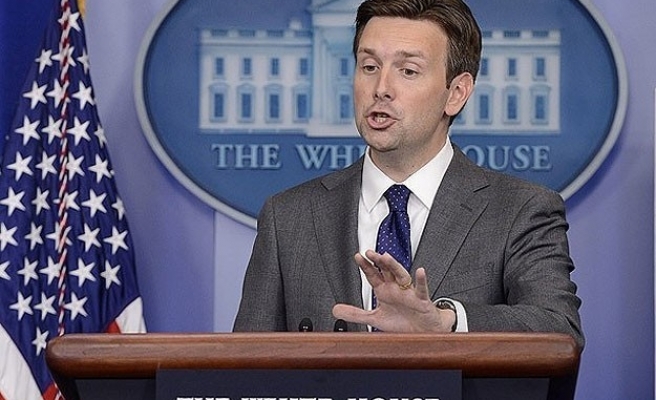 U.S. administration officials made conflicting statements Monday regarding reports that the U.S. and Turkey are negotiating a limited no-fly zone in Syria along the Turkish border.

The Wall Street Journal reported that the two countries have come close to an agreement on using the Incirlik airbase in southern Turkey, and other airbases, to patrol a zone in Syrian alongside Turkish border, which would be off limits to Syrian President Bashar al-Assad regime’s forces.

But Bloomberg news claimed that the U.S. envoy leading the anti-ISIL coalition, Gen. John Allen, negotiated an "air-exclusion zone" inside Syria along the Turkish border that would be protected against ISIL and Assad forces.

"We are certainly actively discussing a range of issues, including our shared concerns about border security with the Turks and reviewing a number of options," State Department spokeswoman Jen Psaki said.

She added, however, that Turkey and the U.S. still have differences on the issue.

"We haven’t made a decision about a specific course of implementation, we’re just continuing to have a discussion with Turkey," she said.

Turkey has urged U.S. and coalition partners to form a safe zone for Syrian refugees as Turkey is currently hosting more than 1.3 million refugees.

Earnest said that on his recent visit to Ankara, Biden intensively discussed the issue with Turkish Prime Minister Ahmet Davutoglu and President Recep Tayyip Erdogan but he added that he would not characterize it as progress or shift in U.S. position.

Added to the confusion are two different statements from the Defense Department.

"Nothing is ever off the table when it comes to our frank conversations with Turkish friends, and we will continue those conversations to determine if there is a version of this proposal that advances our shared objectives," Hillman said.

But she said, currently there is no decision on any form of a no-fly zone.

Another Pentagon spokesman, Colonel Steve Warren, said, "Right now, we don’t believe a buffer zone is the best way to relieve the humanitarian crisis there in northern Syria."