U.S. may charge ex-Blackwater guard with murder in Iraq

Three other former Blackwater security guards face manslaughter charges in connection with the Sept. 16, 2007 shootings at Nisur Square in Baghdad, in which 17 civilians were killed 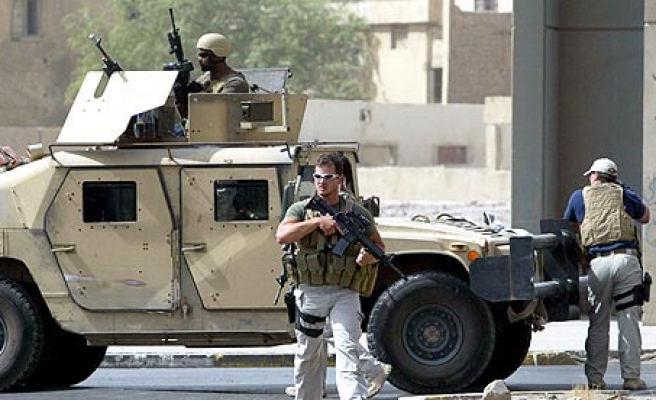 The U.S. Justice Department is considering charging a former Blackwater Worldwide security guard with murder over his alleged role in a 2007 massacre of unarmed civilians in Baghdad, a federal prosecutor said on Wednesday.

The Justice Department is weighing "all available options" against Nicholas Slatten including first-degree murder, Assistant U.S. Attorney Anthony Asuncion said at a hearing in federal court in Washington.

Three other former Blackwater security guards face manslaughter charges in connection with the Sept. 16, 2007 shootings at Nisur Square in Baghdad, in which 17 civilians were killed and more than a dozen others wounded.

Those three men - Dustin Heard, Evan Liberty and Paul Slough - are charged with 14 of the deaths and are due to go on trial in June in the U.S. District Court for the District of Columbia.

Slatten had faced similar charges, but a federal appeals court earlier this month effectively ended the case against him, raising questions about whether prosecutors would continue to pursue him.

In court documents filed in March, prosecutors said they planned to show at trial that Slatten fired the first shots at Nisur Square, and that he had harbored "deep hostility" to Iraqi civilians.

He told people he wanted to "kill as many Iraqis as he could as 'payback for 9/11,'" and boasted of killing an old Iraqi woman who had a knife in her hand because she had been chopping vegetables, prosecutors said.

The massacre, coming in the fourth year of the Iraq war, outraged Iraqis and further strained U.S.-Iraqi ties.

Asuncion said the government has not yet made a decision on whether to charge Slatten, but could seek to have a new indictment against him returned before the June trial of the other former guards.

A lawyer for Slatten, Thomas Connolly, said he would try to have any such indictment thrown out as a vindictive prosecution.

The case against the former guards has dragged on for years amid problems with the evidence. Another former Blackwater guard, Jeremy Ridgeway, pleaded guilty and agreed to cooperate with prosecutors.

Blackwater Worldwide is now known as Academi and is based in McLean, Virginia.

On Wednesday, lawyers for the former guards asked U.S. District Judge Royce Lamberth to dismiss the case, arguing the law it was brought under, the Military Extraterritorial Jurisdiction Act, which covers private contractors supporting the Defense Department, didn't apply.

At the time of the shooting, the guards were escorting a State Department convoy through the streets of the Iraqi capital.

Lamberth has yet to rule on those requests.