US may transfer 2 Guantanamo detainees to Algeria

A hunger strike that has involved a majority of the inmates - and daily force-feeding of dozens - has fueled the calls to shut the detention center. 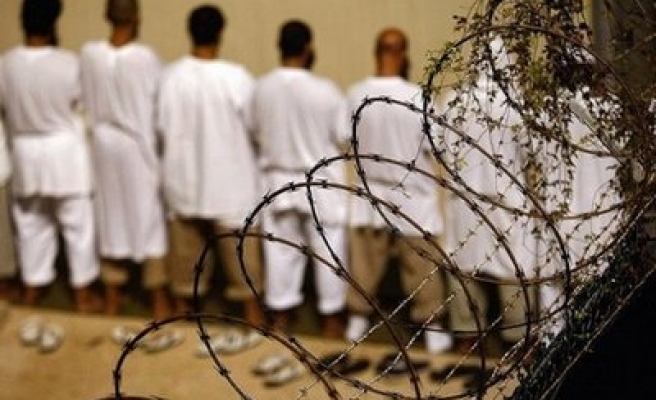 The Obama administration said on Friday it plans to repatriate two inmates to Algeria from the detention center at Guantanamo Bay, Cuba, resuming the transfer of detainees from the controversial prison for the first time in nearly a year.

The step is the latest by President Barack Obama's administration to show his commitment to closing the prison, which has held dozens of prisoners - most without charge - for more than a decade.

Obama promised to do away with the facility during his 2008 presidential campaign, citing its damage to the U.S. reputation around the world, but he has been unable to do so in 4 1/2 years in office.

Congress put tough restrictions on detainee transfers in January 2011. The administration considers the rules too onerous but had not attempted to use its ability to pursue case-by-case waivers even though 86 of the 166 men still held at Guantanamo were cleared for release years ago.

But some members of Congress, mostly his fellow Democrats but also some influential Republicans, have been pushing Obama to make good on his pledge to close the base, which he reiterated in a major national security speech this spring.

A hunger strike that has involved a majority of the inmates - and daily force-feeding of dozens - has fueled the calls to shut the detention center. This week lawmakers blasted its cost, about $2.7 million per prisoner per year, compared with $70,000 per inmate at maximum-security federal prisons.

Dianne Feinstein, chair of the Senate Intelligence Committee and a leading advocate for resuming transfers, ending the force-feeding and closing the prison, renewed her call to send home the 84 others cleared to leave.

"It is in the national security interests of the United States to transfer these detainees to their home countries rather than keep them at our isolated military base in Cuba," she said in a statement supporting the two transfers.

Administration officials declined to provide personal information about the two Algerians being sent to their home country or discuss diplomatic arrangements.

"Over the past few months, a very senior interagency team conducted an intensive review of this matter," Pentagon spokesman George Little said. "Based on their recommendations, and as mandated by Congress, (Defense) Secretary (Chuck) Hagel signed off on the legal requirements to move forward with the transfer of these detainees."

William Lietzau, the top Pentagon official who deals with detainees, said this week he was leaving his post, according to a copy of his farewell note to colleagues obtained by Reuters.

A transfer decision is only made after a receiving country provides assurances it will take measures to mitigate threats posed by the individual and provide him with humane treatment.

White House spokesman Jay Carney said the transfer was being carried out in a manner that protects U.S. national security.

The announcement came ahead of a trip to Washington next week by Yemeni President Abd-Rabbu Mansour Hadi that will include a visit with Obama at the White House and a trip to Capitol Hill. Roughly 90 of those locked up at Guantanamo are from Yemen.

The United States began repatriating Yemeni prisoners after Obama's election in 2008 but halted the practice in 2010.

The Yemeni government says it wants the detainees and is building a facility to hold them for rehabilitation.

But stiff opposition remains. Republican Senator Kelly Ayotte, like McCain a member of the Senate Armed Services Committee, said she opposed the transfers.

The White House said the transfer of the Algerian detainees was possible under current, "highly restrictive" U.S. law. The transfer would happen when all necessary conditions were met in Algeria, spokeswoman Caitlin Hayden said.

The last prisoner transferred out of Guantanamo was Omar Khadr, the youngest inmate and last Westerner held at the base. He was sent in September to finish his sentence in his native Canada.