The nurses are pressing hospitals to buy hazardous materials suits which leave no skin exposed, as well as powered air-purifying respirators 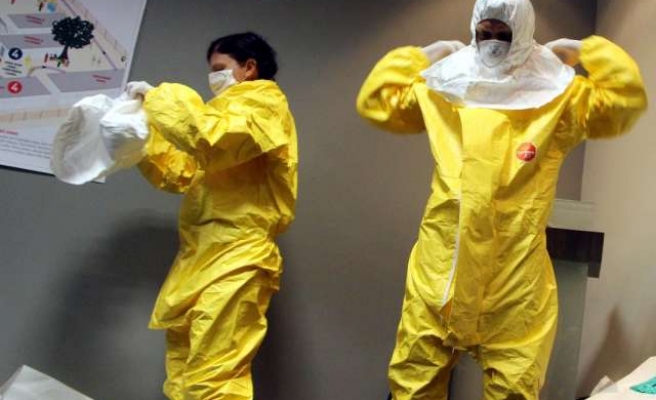 Tens of thousands of nurses across the United States staged protest rallies and strikes on Wednesday over what they say is insufficient protection for health workers dealing with patients possibly stricken with the deadly Ebola virus.

California-based National Nurses United had expected about 100,000 nurses nationwide to participate in the protest, and a spokesman for the union said he expected about that many people to take part before the end of the day.

The union is embroiled in contract talks with the operators of nearly 90 California hospitals and clinics, and one hospital in Washington, D.C.

About 19,000 nurses who on Tuesday began a two-day strike against those California facilities were part of the Ebola measures protest, which in other parts of the country did not involve nurses walking off the job.

Healthcare provider Kaiser Permanente, which operates most of the California facilities where the nurses were striking, has accused the union of using Ebola as a pretext for labor action.

The nurses are pressing hospitals to buy hazardous materials suits which leave no skin exposed, as well as powered air-purifying respirators, to properly protect them from exposure, and they are seeking more training to handle patients suspected of having Ebola.

"The best way to protect our community is to protect our nurses," said Evan Brost, a nurse who joined more than 30 people in a protest outside the White House over Ebola measures.

The U.S. Centers for Disease Control and Prevention says it has ordered $2.7 million worth of personal protective equipment to help hospitals care for Ebola patients, but union officials contend that is insufficient.

"For weeks, union leadership has claimed to the public that this strike is about Ebola," Kaiser Permanente spokesman John Nelson said in a statement. "But the fact is Kaiser Permanente is well prepared, well trained and well equipped to handle potential or diagnosed Ebola cases."

The last U.S. patient being treated for Ebola was released from a hospital on Tuesday.

The Ebola epidemic has killed nearly 5,000 people in West Africa but only one person, a Liberian native, has died in the United States. Two nurses who treated him at a Dallas hospital contracted Ebola but recovered.