US on alert as Hurricane Irene to hit cities

With more than 50 million people potentially in Irene's path, residents stocked up on food and water and worked to secure homes, vehicles and boats. 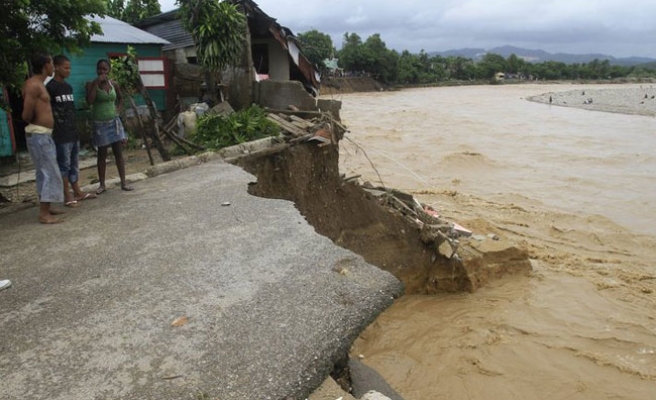 North Carolina braced on Friday for a direct hit from Hurricane Irene, cities along the U.S. east coast were on alert and millions of beach goers cut short vacations to escape the powerful storm.

"I filled my tank up with gas in case I need to leave in a hurry or something, and get a lot of food supplies, taking everything out of my yard ... anything that can fly into a window," said Patricia Stapleton of Newport, North Carolina.

Irene, a major Category 3 hurricane, lashed the low-lying Bahamas on Thursday and was expected to hit North Carolina on Saturday before heading up the coast to New York and beyond.

Coastal evacuations were under way in North Carolina and were ordered for beach resorts in Virginia, Delaware and Maryland. Airlines began to cut flights at eastern airports, made plans to move aircraft from the region and encouraged travelers to consider postponing trips.

After hitting North Carolina, Irene is expected to weaken to a still-dangerous Category 2 storm on the five-step Saffir-Simpson scale, with winds of up to 110 mph (177 kph).

"All the major metropolitan areas along the northeast are going to be impacted," National Hurricane Center Director Bill Read told Reuters Insider. "Being a large hurricane, tropical storm-force winds will extend far inland."

"Saturday is going to be a horrendous day for travel. There will be roads and bridges closed," he said.

Even if the center of Irene stays offshore as it tracks up the coast, its heavy winds and rain could lash cities like Washington, Baltimore, Philadelphia and New York and knock out power, forecasters said.

Irene will be the first hurricane to hit the U.S. mainland since Ike pounded Texas in 2008.

He urged residents of vulnerable areas to move to safety on Friday because the mass transit system, the nation's biggest with 8 million passengers a day, may have to shut if flooding or high winds endanger its buses, subways and commuter trains.

Many New Yorkers do not have cars, so mass transit could be vital in evacuations.

Long Island, the populous area that extends about 100 miles (160 km) east into the Atlantic Ocean from New York City, could be hit hard if Irene stays on its current track.

In Washington, Irene forced the postponement of Sunday's dedication ceremony for the new memorial honoring civil rights leader Martin Luther King Jr. Tens of thousands of people, including Obama, had been expected to attend.

Flooding from Irene killed at least one person in Puerto Rico and two in the Dominican Republic. The storm knocked out power in the Bahamian capital Nassau and blocked roadways with fallen trees.