US on high alert as Hurricane Irene closes in

President Barack Obama said the impact of the unusually large storm could be "extremely dangerous and costly" for a nation that still recalls the destruction of Hurricane Katrina in 2005. 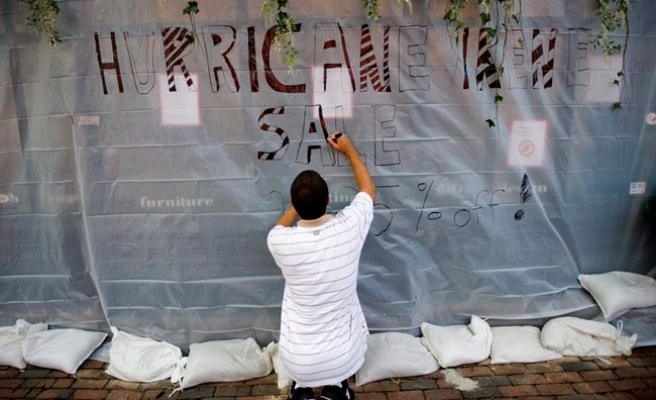 Washington, D.C. and states from the Carolinas through Maine declared emergencies due to Irene, a nearly 600 mile (960 km)-wide hurricane that put 55 million Americans on alert and threatened to cause billions of dollars in damage.

"The core of the hurricane will approach the coast of North Carolina tonight and pass near or over the North Carolina coast Saturday morning," the U.S. National Hurricane Center said in an advisory on Friday night.

President Barack Obama said the impact of the unusually large storm could be "extremely dangerous and costly" for a nation that still recalls the destruction of Hurricane Katrina in 2005.

"All indications point to this being a historic hurricane," Obama said.

Hundreds of thousands of residents and vacationers were evacuating from Irene's path.

A quarter of a million New Yorkers were ordered to leave homes in low-lying areas, including the financial district surrounding Wall Street in Manhattan, as authorities prepared for a dangerous storm surge and flooding on Sunday in the city and farther east on Long Island.

Some New York hospitals in flood-prone areas were evacuating patients and the mass transit system, which carries 8.5 million people on weekdays, was due to start shutting down around noon (1600 GMT) on Saturday.

"We've never done a mandatory evacuation before and we wouldn't be doing it now if we didn't think this storm had the potential to be very serious," Mayor Michael Bloomberg told a news conference.

As authorities prepared for a potential major disaster on the densely populated east coast, airlines canceled about 7,000 flights and moved planes out of Irene's path.

All three major New York area airports were to close to incoming flights at noon (1600 GMT) on Saturday, the Port Authority of New York and New Jersey said.

Officials were taking every precaution with Irene because they remember all too well how Katrina swamped New Orleans, killing up to 1,800 people and causing $80 billion in damage.

Defense Secretary Leon Panetta said the military stood ready to aid in the response to Irene, with more than 100,000 National Guard forces available if needed in eastern states.

The earliest edges of Irene toppled trees, caused localized flooding and knocked out power to 7,600 residents of Wilmington, North Carolina by Friday night.

People in a shelter at a local school said they feared the storm's impact but were reluctant to evacuate entirely.

"We were going to go to Charlotte but we were told we might not be able to get back if there was a lot of damage," said Chastity May, 34, as she watched over her 4-year-old son.

Some were looking to capitalize on the approaching storm.

Greg Bayly, 52, and Scott Olden, 24, were selling generators out of a rented cargo truck along a busy Wilmington street that leads out to nearby beaches. Bayly said the pair could process credit cards to complete purchases, despite the rapidly deteriorating weather conditions.

U.S. federal and state leaders, from Obama downward, urged the millions of Americans in the hurricane's path to prepare and to heed evacuation orders if they received them.

Irene weakened early on Friday to a Category 2 hurricane from a 3 on the five-step Saffir-Simpson scale but it was still carrying winds of up to 100 mph (155 kph).

It is expected to remain a hurricane as it sweeps up the coast over the weekend. The Miami-based hurricane center said Irene could dip below hurricane strength before reaching New England but its impact would not vary much.

Irene, the first hurricane of the 2011 Atlantic season, already caused as much as $1.1 billion in insured losses in the Caribbean this week, catastrophe modeling company AIR Worldwide said, with more losses expected to come.

"Tropical storm force winds are expected to begin along the mid-Atlantic coast Saturday morning with hurricane conditions expected by Saturday afternoon," the NHC said in its final advisory Friday night.

Benedict Willis III, director of floor operations for investment banking boutique Sunrise Securities, said the New York Stock Exchange had a responsibility to open on Monday after the storm passes because millions of investors will be relying on it for stock prices.

"But if the waters rise this high," he said, gesturing at the buzzing trading floor, "then it's a bigger problem than I can handle. My name's not Noah."

Irene will be the first hurricane to hit the U.S. mainland since Ike pounded Texas in 2008.

In Washington, Irene forced the postponement of Sunday's dedication ceremony for the new memorial honoring civil rights leader Martin Luther King Jr. Tens of thousands of people, including Obama, had been expected to attend.

Flooding from Irene killed at least one person in Puerto Rico and two in Dominican Republic. The storm knocked out power in the Bahamian capital, Nassau, and blocked roads with trees.