U.S. President Obama's administration heads to court in a showdown over whether Arizona's much-criticised law on immigrants. 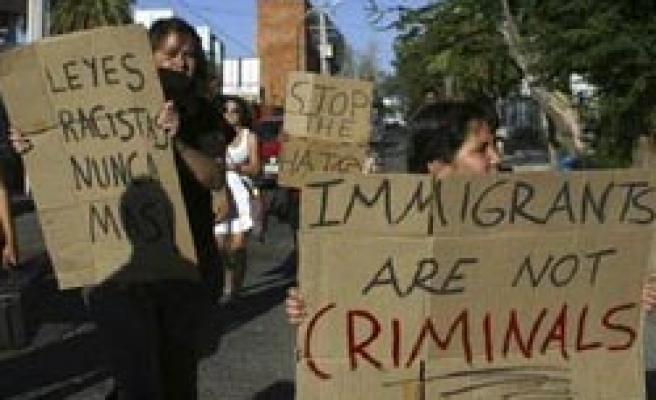 U.S. President Barack Obama's administration heads to court on Thursday in a showdown over whether Arizona's much-criticised law on immigrants.

The Republican-controlled Arizona Legislature passed the law in April to try to stem what they called the flow of "illegal immigrants" over the state's border with Mexico under the pretext of cut down on drug trafficking and crime -- setting it on a collision course with the federal government.

The law requires state and local police, during lawful contact, to investigate the immigration status of anyone they reasonably suspect of being an "illegal" immigrant.

The Justice Department filed suit this month, arguing the measure would undermine U.S. foreign policy and violate the U.S. Constitution.

Bolton could issue a preliminary injunction if she finds the Obama administration would ultimately succeed in its quest to have the law struck down.

"A ruling in either direction will probably be a very strong signal about how this judge views the validity of the Arizona law and the strength of the administration's arguments," said Carissa Hessick, an associate law professor at Arizona State University.

At stake is "whether the administration has the full authority over immigration policy and immigration enforcement. It's potentially a very big day," she added.

Immigration, particularly what to do with some 11 million illegal immigrants working in mostly low-wage jobs across the United States, is a divisive issue in this election year.

Obama, whose Democratic Party faces an uphill battle to maintain its congressional majorities in November elections, backs a comprehensive overhaul of immigration laws. It would tighten workplace and border security, and allow unauthorized migrants in good standing to learn English, pay a fine and get on the track to citizenship.

Opinion polls consistently show the Arizona law is supported by a solid majority of U.S. voters, posing risks for Obama in opposing the measure, which he warns could lead to a 'patchwork' of conflicting state laws across the country.

In a brief filed earlier in the week, lawyers for Arizona Governor Jan Brewer argued the state had not pre-empted federal authority, but sought to "assist with the enforcement of existing federal immigration laws in a constitutional manner."

In a statement, Brewer said she was confident the court would "reject President Obama's attempt to prevent our state from protecting its citizens as a result of his failure to enforce federal immigration laws."

Arizona argued the government had failed in its duty to secure the porous Mexico border. It said half of all illegal immigrants in the United States entered through the state and that illegal migrants who had committed crimes accounted for 17 percent of the state's prison population.

The Justice Department suit is one of seven opposing the law. The challenges could delay any final determination of the law for years.