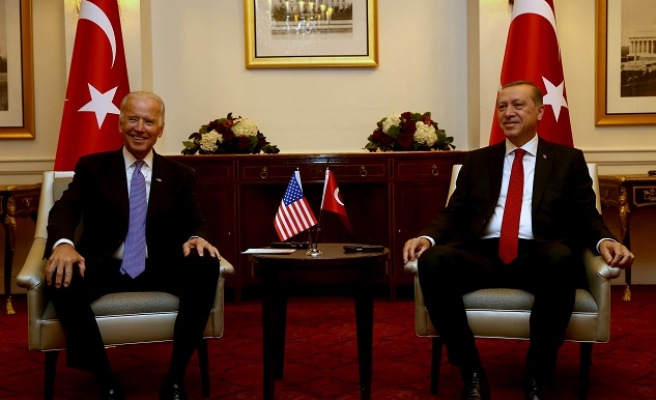 The U.S. on Thursday pledged to increase cooperation with Turkey in Ankara’s efforts to fight the PKK terror group, according to the Turkish presidential spokesman.

The assurances came during a brief but wide-ranging security meeting between Turkish President Recep Tayyip Erdogan and U.S. Vice President Joe Biden while on the sidelines of global nuclear summit in the American capital.

Erdogan and Biden explored opportunities for greater intelligence sharing regarding the PKK and ways to prevent funding to the group, according to Turkish presidential spokesman Ibrahim Kalin.

Biden, who expressed American support for Turkey’s effort in fighting the terrorist group, also said the U.S. would work to develop a plan that would focus on U.S. and Turkish goals and, Ankara’s sensitive approach to the region -- specifically operations conducted around the Manbij pocket in Syria, Kalin said.

The Manbij pocket is a “red line” of demarcation for Turkey that has pledged to prevent a breach of the western front by the PYD.

Turkey sees no difference between the Syrian affiliates of the PKK and ISIL, according to Kalin, and that Ankara would never allow those groups to become effective, nor would it tolerate them.

Erdogan and Biden addressed additional steps that could be taken against ISIL in Syria, in particular, measures regarding the Manbij pocket that encompasses the militants’ self proclaimed capital of Raqqa, and the cities of Manbij and Jarabulus, Kalin said.

"It has been discussed to continue to both intelligence gathering and military efforts over this special line," he added.

The security of Turkish troops who are training local forces in Iraq to fight ISIL was also on the agenda after Erdogan raised the issue in the wake of an attack last week at Bashiqa camp that killed a lieutenant.

Both sides discussed how to increase cooperation about the camp. Kalin clarified that a call made earlier this week by the U.S. for its military and diplomatic personnel to vacate southern Turkey was due to intelligence received by Ankara and Israel about an imminent attack on American and Israeli targets in Turkey.

Efforts continue to prevent attacks, Kalin said without providing any details. Turkey’s response to the refugee crisis at its borders was discussed with Biden acknowledging Ankara is bearing the brunt of the burden.

The vice president said the U.S. supported a recent deal reached between Turkey and the EU that aims to stem the flow of refugees to Europe, Kalin said.