US probes steel pipe imports from Turkey, 8 other countries

The US Commerce Department has launched a large trade investigations into charges that manufacturers in Turkey, India and seven other countries are selling steel pipe used by oil and natural gas producers at unfairly low prices in the United States. 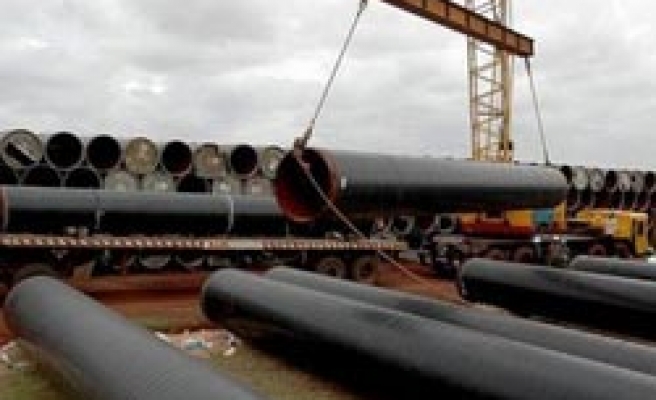 The US Commerce Department on Tuesday launched one of its biggest trade investigations in years into charges that manufacturers in Turkey, India and seven other countries are selling steel pipe used by oil and natural gas producers at unfairly low prices in the United States.

Imports of oil country tubular goods (OCTG) from the nine countries totaled nearly $1.8 billion in 2012, more than double their total in 2010, as rising US oil and natural gas production have increased demand for the pipe.

In 2010, the United States slapped duties on imports of OCTG from China after they hit about $2.8 billion in 2008. That created an opening for the other foreign suppliers.

The latest case targets South Korea, which exported about $831 million worth of the pipe to the United States last year, as well as India, Vietnam, the Philippines, Saudi Arabia, Taiwan, Thailand, Turkey and Ukraine.
US producers are asking for anti-dumping duties as high as 240 percent on India, 158 percent on South Korea, 118 percent on Thailand and 111 percent on Vietnam to offset what they say is below market pricing, and lesser but still hefty duties on the other five countries.

For two countries, Turkey and India, US producers are seeking additional countervailing duties to offset alleged government subsidies. İstanbul-based Turkish Steel Pipe Manufacturers' Association (ÇEBİD) on Tuesday said it will try its best to explain to US buyers that Turkish products have no involvement in dumping and that that Turkish products are not subsidized.

The Commerce Department will make a preliminary decision on countervailing duties in September and on anti-dumping duties in December. Final decisions will come in 2014.

US companies seeking the relief include US Steel, which told the US International Trade Commission (ITC) at a hearing on Tuesday that it spent $2.1 billion in 2007 to boost its OCTG production by buying a smaller manufacturer.

But "for three years now, I have heard the same tale from our salesmen: 'Imports are underselling us. We must lower our prices or our customers will go elsewhere,'" Doug Matthews, a senior vice president at US Steel, told the panel.

Under the US system, the Commerce Department investigates charges of unfair trade and determines whether duties are appropriate and if so at what level. But the ITC must approve the probe and has the final word on whether duties are imposed.

The commission will vote in mid-August on whether there is enough evidence that the imports are injuring US producers for the Commerce Department to continue with the probe. Other producers involved in the case include Maverick Tube Corporation, Energex Tube and TMK IPSCO.

They told the Commission that US demand for OCTG between 2010 and 2012 was the strongest they had seen in 25 years, but imports prevented them from getting a fair price for their products. Brad Lowe, a senior executive at Maverick, told the ITC "Imports have taken away sales and have significantly suppressed and depressed market prices."

Linda Andros, legislative counsel at the United Steelworkers Union, told the panel that US jobs were at risk.

"If unfair trade is left unchecked, there is no doubt that many of our members that produce these products will begin being laid off," Andros said. Scott Barnes, senior vice president at TMK IPSCO, conceded that OCTG imports have fallen so far in 2013, after rising in previous years. But that's only because "we aggressively fought imports back by price cutting in the latter part of 2012," Barnes said.