'That's one of the most complex challenges that we face right now,' says Gen. John Allen 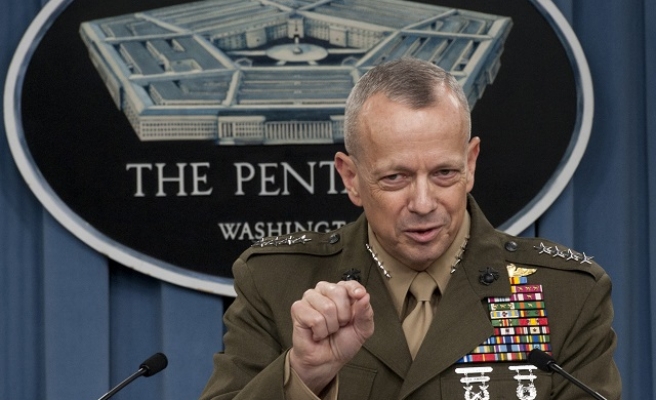 Maintaining support for Kurdish YPG forces in Syria while cooperating with Turkey is one of the most complex challenges facing the U.S., President Barack Obama’s special envoy to the anti-ISIL coalition said Wednesday.

Testifying before the Senate Foreign Relations Committee on U.S. Mideast strategy, retired Gen. John Allen said the U.S. was in a "very delicate, diplomatic process" in trying to work with Turkey and at the same time partnering with the YPG and PYD - affiliated Syrian groups of the terrorist-designated PKK.

Complicating those efforts are media reports that the YPG and PYD have provided supplies to the PKK that has waged a more than 30-year war against Turkey.

"We're not entirely sure that's accurate so we're watching it very closely because of the implications in Ankara and the potential tension that we have with the Turks over this real opportunity to take advantage of the capacity of opposition elements in Syria that can, in fact, liberate large segments of the population and the region from ISIL," said Allen.

The U.S. considered the YPG a potential partner after the group was successful in clearing the Syrian city of Kobani from ISIL.

Allen stressed that Turkey was a "treasured NATO ally" and added that the U.S. supported Turkey's response to PKK attacks.

The Kurdish YPG is the armed wing of Syrian Democratic Union Party (PYD).

Turkey designates the PYD and YPG as terrorist groups, but the U.S. believes they are a "reliable partner on the ground" in countering ISIL in Syria.

Due to the relationship between the PYD and PKK, Turkey does not support the idea of partnering with Kurdish forces in Syria to counter ISIL, as ammunition and weapons - which would be provided by coalition forces to Kurdish ground forces in Syria - could be indirectly delivered by those groups to the PKK in Turkey.

After Turkey joined the coalition earlier this year and opened its Incirlik Air Base in the south that allowed for expanded operations against the militants, PKK's attacks inside Turkey increased after a two-and-a-half-year lull in fighting.

More than 150 members of Turkish security forces have been martyred since, according to the government, and more than 2,000 PKK terrorists have been killed.