U.S. courts have ruled that officers should have wide latitude to use physical force to defend themselves or to take suspects into custody. 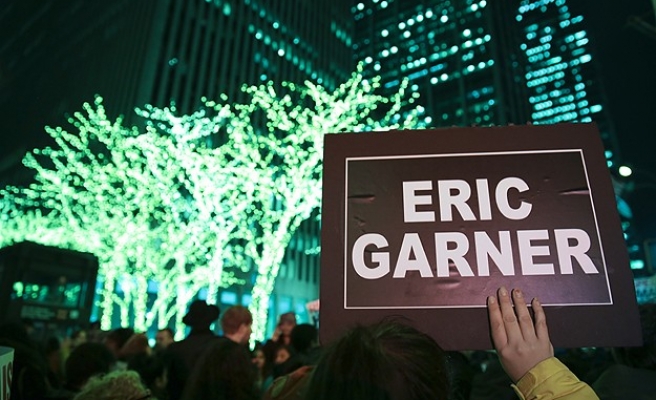 U.S. Attorney General Eric Holder said on Wednesday the Justice Department was launching a federal civil rights investigation into the death of Eric Garner, an unarmed black man who died after New York police put him in a chokehold.

Earlier on Wednesday, a New York grand jury decided not to charge a white police officer who applied the chokehold as police tried to arrest Garner in July in the New York borough of Staten Island on suspicion of illegally selling cigarettes.

"Our prosecutors will conduct an independent, thorough, fair and expeditious investigation," Holder told reporters. "In addition to performing our own investigative work, the department will conduct a complete review of the material gathered during the local investigation."

It was the second grand jury in just over a week to decline to prosecute a white policeman in the death of an unarmed black man. The decision by grand jurors in Ferguson, Missouri, in the death of teenager Michael Brown sparked a spasm of violence, with businesses burned and looted.

Calling Garner's death a "tragedy," Holder said: "All lives must be valued. All lives."

He said the case was one of several recent incidents across the country that "have tested the sense of trust that must exist between law enforcement and the communities they are charged to serve and protect."

Holder urged protesters to "remain peaceful in their demonstrations, and not to engage in activities that deflect our attention from the very serious matters our nation must confront."

U.S. JUSTICE SYSTEM MAKES IT DIFFICULT TO INDICT A COP

The decision not to indict a New York policeman over a fatal chokehold underscores how difficult it is to charge an officer in the United States, even when the tactic appears to contradict police department policy and is caught on video.

Although Wednesday's decision caught some Americans by surprise, indictments of police officers for excessive force are extremely rare for political, cultural and legal reasons.

"What's so shocking about this grand jury decision for most folks is that the evidence on the videotape seemed so clear, but grand jurors will very often give the police officers the benefit of the doubt," said Vincent Warren, executive director of the Center for Constitutional Rights. "They treat them not as a citizens but as super citizens."

It was not known precisely why the grand jury in Staten Island, one of New York City's five boroughs, decided against indicting Daniel Pantaleo, the white officer whose chokehold was cited by medical examiners as the primary cause in the death of unarmed African American Eric Garner in July.

Grand juries generally operate in secret. It was not known even what charges this one considered bringing against Pantaleo, although lawyers not connected to the case said the potential counts likely included manslaughter, at least.

It is rare for potential defendants to testify in grand jury proceedings but prosecutors have discretion deciding which witnesses to call and can choose to put a police officer accused of misconduct on the stand.

The decision not to indict echoed a similar finding last month by a grand jury in St. Louis County, Missouri, which declined to indict a police officer, Darren Wilson, in the shooting death of Michael Brown.

The officers in both cases were white, while both men they killed were unarmed African Americans, fueling nationwide protests over race relations and excessive police force.

Pantaleo, who is on suspension, said in a statement he never meant to harm anyone and felt very bad about Garner's death.

He and other officers tackled Garner, a 43-year-old father of six, on a sidewalk on July 17, and Pantaleo put Garner in a chokehold. Unlike in Brown's death, someone captured the episode on video. Garner died shortly afterward.

The city's medical examiner ruled the death a homicide, meaning that the death was caused by another person. The term does not imply intent, a key legal factor.

Convicting someone of the most serious charges, such as murder, generally requires proving intent to commit a crime. Less serious charges might require proving only criminal negligence or recklessness.

The New York Police Department's patrol manual bans chokeholds, calling them dangerous, but even if the department finds that Pantaleo violated policy, whether or not someone broke police procedure does not mean it is criminal.

Pantaleo might be held legally responsible in other ways. The U.S. Justice Department said it would investigate whether Garner's civil rights were violated, and Garner's family could sue the police department for wrongful death or alleged civil rights violations. Police have yet to say whether they will take any disciplinary action.

The U.S. Supreme Court laid out a standard for when police may use excessive force in 1989, in a civil lawsuit about a diabetic man who said he was injured during a roadside stop.

The court ruled the amount of force must be reasonable under the circumstances, such as whether a suspect resists arrest, but it also said reasonableness should be judged from the perspective of an officer on the scene, not from hindsight.

"Police officers are often forced to make split-second judgments - in circumstances that are tense, uncertain, and rapidly evolving - about the amount of force that is necessary in a particular situation," the court ruled in an opinion written by then-Chief Justice William Rehnquist.

The job of a grand jury is to determine whether probable cause exists that someone committed a crime, but Bennett Gershman, a former prosecutor with the Manhattan District Attorney's office, said that in his experience, the prosecutor sets the direction of a grand jury by deciding what evidence the jurors see.

In one case from the fallout of Hurricane Katrina, a jury in December 2013 acquitted a New Orleans police officer whom prosecutors accused of shooting a man in the back as the man ran away. In 2008, a jury acquitted a Michigan sheriff's deputy of federal civil rights charges after a man died in a struggle with officers.