Utility companies said tens of thousands of customers along the path of the storm were without power, with the worst outages in parts of Alabama and Georgia. 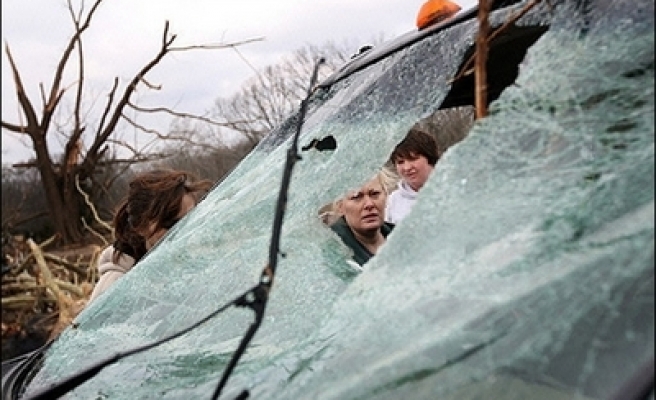 A tornado-producing storm system that has killed at least 34 people this week continued to batter a swath of the southern United States on Wednesday with heavy rainfall, flooding and the potential for more twisters, meteorologists said.

Florida Governor Rick Scott declared a state of emergency for 26 counties deluged by as much as 1 to 3 inches (2.5 to 7.6 centimeters) of hourly rain as severe thunderstorms raged across the northern part of the state.

Law enforcement in Walton County in the Florida Panhandle said severe flash floods had stalled cars and inundated some homes, according to the National Weather Service.

Schools were closed in several Panhandle counties including Escambia, where emergency officials fought to save motorists stranded by flood waters. County officials urged residents not to drive amid rising water, damaged roads and storm debris.

"This is an extremely dangerous situation," the weather service said in emergency alerts that also included Alabama's Gulf Coast.

The storms were expected to spread across portions of the East Coast, from Virginia through the Carolinas, National Weather Service meteorologist Corey Mead said. Storms could drop roughly 2 to 5 more inches (5.1 to 12.7 centimeters) of rain in areas and launch fresh tornados, Mead said.

Severe conditions may persist into Thursday, though "it looks like the weather may be quieting down as warmer, more humid air is pushed offshore by a cold front moving through the Appalachians," Mead said.

There have been 27 confirmed weather-related deaths and more than 200 people injured across Arkansas and Mississippi, the hardest hit of six states struck by the storm system, as tornadoes reduced homes to rubble, shredded trees and launched vehicles through the air.

Deaths have also been reported in Oklahoma, Iowa, Alabama and Tennessee. The Florida Highway Patrol has reported one weather-related fatality from drowning, CNN reported on Wednesday.

Shelters have been set up for thousands of families forced out of their homes while the National Guard, local police and residents who had lost all their possessions sifted through the rubble looking for more victims.

More than 2,000 houses and 100 commercial properties have been reported damaged.