US-Western walkout as Ahmadinejad speaks of 9/11 at UN 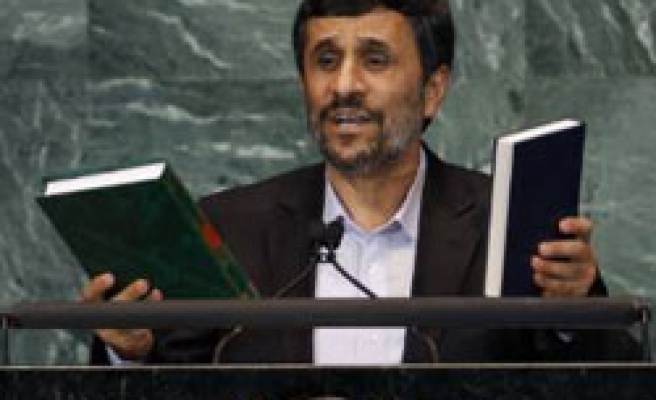 The US and other Western delegations on Thursday walked out as Iranian President Mahmoud Ahmadinejad at the UN said most people believed the US government was behind the 9/11 attacks.

Addressing the General Assembly, the Iranian president said there was a theory that "some segments within the US government orchestrated the attack to reverse the declining American economy and its grips on the Middle East, in order also to save the Zionist regime.

"The majority of the American people as well as most nations and politicians around the world agree with this view," Ahmadinejad told the 192-nation assembly, calling on the United Nations to establish "an independent fact-finding group" to look into the events of Sept. 11.

The U.S. delegation walked out during Ahmadinejad's speech. It was joined by European Union delegations.

Ahmadinejad said "some evidence that could support alternative theories had been covered up -- passports located in the rubble and a video of an unknown individual who had been involved in oil deals with some American officials."

About 3,000 people died when hijackers crashed planes into the World Trade Center and the Pentagon and a fourth aircraft plummeted into a Pennsylvania field in 2001.

He criticized the world powers for trying to halt Iran's nuclear program. Ahmadinejad accused them of monopolizing nuclear power while "they have continued to maintain, expand and upgrade their own nuclear arsenals."

He said that 2011 should be declared a year of nuclear disarmament -- "Nuclear Energy for All, Nuclear Weapons for None."

As he had in past years, the Iranian president reminded US and West of Israel's nuclear arms to defend the right of his country to a nuclear program that Western powers insist is aimed at developing arms.

"This regime (Israel), which enjoys the absolute support of some Western countries, regularly threatens the countries in the region and continues publicly announced assassination of Palestinian figures and others, while Palestinian defenders ... are labeled as terrorists and anti-Semites," he said.

"All values, even the freedom of expression, in Europe and the United States are being sacrificed at the altar of Zionism," Ahmadinejad said.

The UN Security Council in June imposed a fourth set of sanctions against Iran and the European Union and the US have added even more extensive unilateral sanctions targeting its foreign trade.

Iran insists that its nuclear programme has only peaceful intentions.

In his speech, Ahmadinejad condemned some of the permanent members of the UN Security Council - Britain, China, France, Russia and the US - for monopolising nuclear power.

Obama earlier told the assembly the door to diplomacy was still open for Iran, but it needed to prove its atomic program is peaceful, as it says it is.

"The door remains open to diplomacy should Iran choose to walk through it. But the Iranian government must demonstrate a clear and credible commitment, and confirm to the world the peaceful intent of its nuclear program," he told world leaders.