In a phone call to state television from his hospital bed in Havana, he said he would finish this session of treatment on Friday but gave no date for his return home. 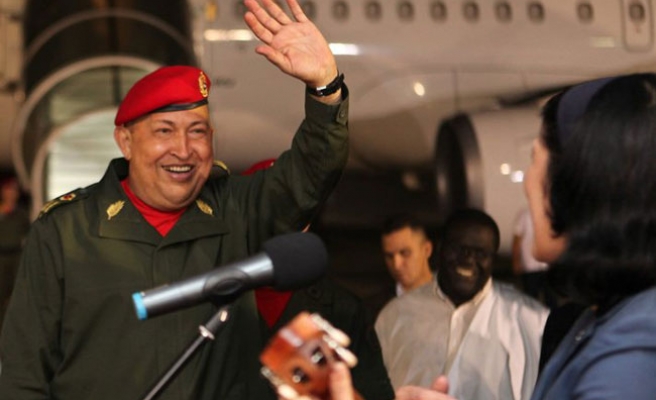 President Hugo Chavez told Venezuelans on Thursday he was responding well to a second round of chemotherapy in Cuba and accused the opposition of stirring up street protests at home ahead of a 2012 election vote he has vowed to win.

The 57-year-old socialist leader broke the news in June that he had undergone cancer surgery, prompting questions about his fitness to continue governing the OPEC nation.

In a phone call to state television from his hospital bed in Havana, he said he would finish this session of treatment on Friday but gave no date for his return home.

"I'm taking well to the treatment ... I feel good. I'm receiving the corresponding dosage of chemotherapy in this battle that we're winning and will win," he said. "I will be back in Venezuela soon. Everything must end well, I'm sure."

Chavez had an operation in Cuba to remove a baseball-sized tumor and has been undergoing treatment on the communist-led island as a guest of his close friend and mentor Fidel Castro.

He says his doctors have found no malignant cells in his body since the surgery but that he may need more chemotherapy. Chavez has not said exactly what type of cancer he has.

The former soldier seemed back to his normal fiery self in some ways, accusing the opposition of encouraging protests by doctors, public transport and metal workers demanding better pay that shut some streets in Caracas on Thursday.

"To the desperate counter-revolutionaries ... don't even think about it, because the answer would be devastating," he said. "I warn you not to take the path of destabilization."

Absent from the airwaves and Twitter since Tuesday, he first interrupted a program in which the health minister was promoting a new high-tech medical laboratory -- a sign he wants to show he is able to continue governing, albeit from afar.

He spoke for only a few minutes, but managed a jab at the United States for slashing social spending to cut its deficit.

He later called in to the televised inauguration of a military helicopter unit, promising to continue strengthening the armed forces and pledging his support to everyone there.

Responding to his tough comments in a statement, the Democratic Unity opposition coalition said they stemmed from uncertainty among Chavez loyalists over his illness.

"The threats expressed by the president today show the tension in the government and within the ruling party arising from his health," it said. "Chavez attacks us, forgetting that the people want peace and unity."