Pavlof Volcano, which has been spewing ash and lava for years in an uninhabited region nearly 600 miles (966 km) southwest of Anchorage, began erupting with new intensity 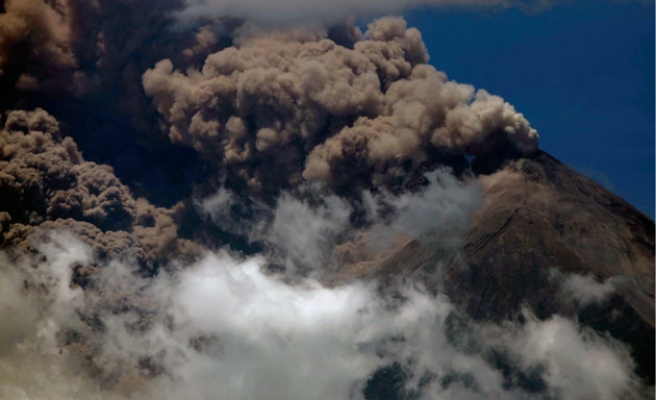 A volcanic eruption in Alaska that sent a plume of ash and smoke high into the sky forced a regional airline to cancel flights on Wednesday, even as scientists downgraded a rare red alert warning for volcanic activity.

Pavlof Volcano, which has been spewing ash and lava for years in an uninhabited region nearly 600 miles (966 km) southwest of Anchorage, began erupting with new intensity this week and prompted Alaska scientists to issue their highest volcanic alert in five years on Monday.

Cancellations continued through Wednesday as the airline continued monitoring activity hourly. PenAir serves many communities that are off the state's road system and is accustomed to extreme year-round weather conditions.

Pavlof lies below a route frequently used by jetliners flying between North America and Asia, but those planes generally fly at elevations of 30,000 feet (9,144 meters) and likely would be unaffected by ash at lower elevations, observatory scientists have said.

Scientists at the federal-state Alaska Volcano Observatory reduced the alert level from red to orange, the second-highest level, thanks to reduced seismic tremor activity, according to geologist Game McGimsey.

A red alert means a hazardous eruption is imminent, underway or suspected, while an orange alert indicates an increased potential for eruption or that an eruption is underway but poses limited hazards, according to the observatory.

Plumes of steam and diffused ash from Pavlof continue to reach heights as high as 24,000 feet (7,315 meters) or about 4.5 miles, and the volcano remains under close watch, McGimsey said. No ash has reached any communities, he added.

"The eruptive activity continues pretty strong," McGimsey said. "There is lava fountaining going on. It's very visible at night time from web cams."

Activity at Pavlof began to intensify over the weekend pushing thin ash upward. The red alert issued on Monday night was the first since 2009, when Alaska's Mount Redoubt produced a series of eruptions that spewed ash 50,000 feet (1,500 meters) into the air.