The US administration has hundreds of military bases in many countries in which thousands of American soldiers are lodged. 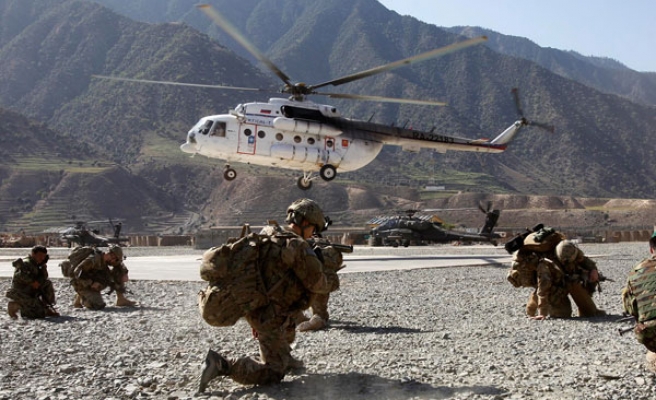 As the world debates on the possibility of a military intervention, which would entail punitive airstrikes against the Syrian dictator Bashar al-Asad, American military bases abroad are again under the spotlight. The US administration has hundreds of military bases in many countries in which thousands of American soldiers are lodged. These bases grants the US considerable leverage in global politics. However, several polls indicate that most Americans have not heard about them.

Among many others, having more than eight hundred military bases overseas is what makes the US the super military power of this century. There are only forty-three countries in the world that do not have any American military presence within their borders. The impression that American bases leave on the world map is like that of a spider’s web. The US army has extended its military might to every continent except Antarctica. A Pentagon report in 2007 said there that while thirty-nine countries host only one military base, one hundred and forty countries contain more than one.. According to another report prepared by the Congress, the total number of the overseas bases is eight hundred and fifty. Including the bases within the US, the total number of military bases reaches 5300.

However, it is highly believed that the real number is more than the official figures state. The existence of secret US military bases may indeed be one of the worst kept secrets of the worldOne hundred and fifty countries are suspected of hosting at least one hundred unofficial US military bases and almost half a million American soldiers. When civilian staff and local officers are included, the total number surpasses 1.8 million personnel. The worldwide presence of the American military particularly spread after the invasions of Iraq and Afghanistan. From an economic point of view, the cost of maintaining these bases appears to be unbearable for the US economy. The total surface area covered by known military bases is approximately 120 thousand square kilometers. This covers a larger territory than several nations. 344 thousand buildings, 184 thousand compounds and 48 thousand other buildings for various services also makes Washington the world’s biggest real-estate baron.

Although very little is reported about the military bases, their influence is well-recognized during the preparation process of a military operation. Before the last deal between the US and Russia about the demolishing of Syrian chemical weapons, US commanders sent a fleet composed of one aircraft carrier, 4 four destroyers, one cruiser to the Red Sea and one amphibious assault ship to the Mediterranean. This deal resulted in US President Barrack Obama’s decision to pull-back from the eastern Mediterranean and the Persian Gulf after declaring his intention to launch a limited operation against Syria. American officials told the press that the fleet would play a supportive role should a military operation become necessary. The US aircraft carrier USS San Antonio is able to carry four helicopters simultaneously in addition to a number of fighter jets. Furthermore, the US has five war ships with Tomahawk missiles in the Mediterranean.

Russia and France strengthening their fleets

Along with the US, another country with military bases outside of its territory is France, which maintains bases in former French colonies in Africa. Yet the Paris administration was late in joining other countries in setting up a military base in the Persian Gulf. The first French base in the region was opened in May 2010. The base in Abu Dhabi, which is the first military base France has opened for fifty years, is located at a very strategic point in the Straits of Hormuz. Two frigates and five hundred French soldiers have been assigned to ensure trade security in the struggle against pirates from Somalia. Reconsidering the overseas base strategy, In 2005 the French leadership announced the mission of the bases to provide logistic support to the French Army and offer training to local armies.

On the other hand the Russians are not happy to see an expanding American military presence in the Mediterranean and sent an intelligence ship to the region as a counter procedure. The SSV-201 Priazovye research ship, which is a member of the Russian fleet in the Black Sea and is usually based in Sevastopol, was sent to the Syrian coast to join other Russian vessels. Russian military officials announced that the ship had a special mission to execute in the eastern Mediterranean. Despite the absence of an official statement from the Russian Secretary of Defense, Russian Foreign Minister Sergei Lavrov said he did not expect close combat with the forces loyal to the Syrian dictator Bashar al-Asad. Since the beginning of the civil uprising against the Baath regime, Russia has stood closely with the regime. In a previous statement, the Russian Defense Ministry stated that the deployment of the ship was a routine move and that they did not have any intent to increase Russian military presence in the region.

The base in southern Cyprus remains closed

The British military base in southern Cyprus has always been at the center of debates regarding any military operations in the Mediterranean. This time, however, Greek Cypriot ministers do not seem to be willing to allow foreign forces to use their territory. After a meeting with the Egyptian Foreign Minister Nabil el Arabi, the Foreign Minister of the Republic of Southern Cyprus Ioannis Kaoulides said, “The United Kingdom, France and the US cannot use Cypriot territory with the aim of conducting a military operation against Syria. It is the basic reasoning behind our demand to ask for guarantees. The British military base in Cyprus is not under the surveillance of our administration.”