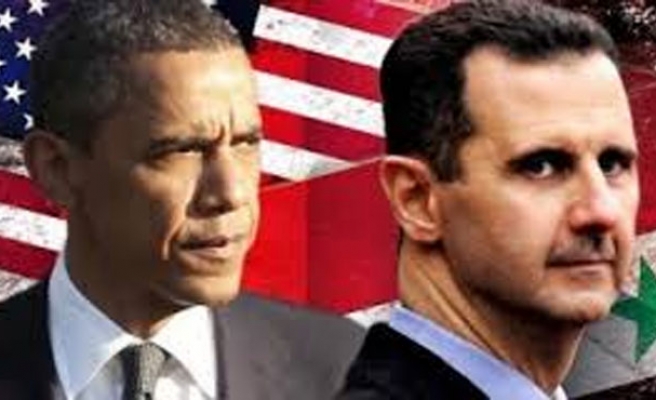 The Obama administration on Tuesday rejected claims by Syria that it has received intelligence from the U.S. through a third party.

The White House and State and Defense departments all rejected the assertions.

White House press secretary Josh Earnest said the U.S. has never coordinated actions with the Assad regime and would not.

But he noted that prior to initiating strikes in Syria, the U.S. informed the regime of its plans, through its ambassador to the United Nations.

"What was made clear in that communication is that it's the responsibility of the Syrian government, to put it bluntly, to stay out of the way," Earnest said.

"We don't have any direct or indirect communication with the Assad regime in military terms," Rear Adm. John Kirby told reporters.

Assad said third parties, among them Iraq, were conveying "information" rather than a coordination with the U.S.-led coalition.

Kirby said questions about possible Iraqi intermediaries should be referred to Iraqi officials.

State Department spokeswoman Jen Psaki also touched on the issue and said the U.S. would not work with the Assad regime as it has created an environment that ISIL has exploited.

She said she would not go through details of private diplomatic discussions with Iraq.

The White House on Tuesday also said it hopes Congress will move quickly on a new military force authorization against ISIL, expected to be soon submitted by President Barack Obama.

"We are hopeful that Congress will act on authorization to use military force relatively soon," White House press secretary Josh Earnest said Tuesday, noting that new authorization will be a "powerful symbol" from Congress to "allies and enemies" that the U.S. is behind the strategy to destroy ISIL.

“Hopefully, there will not be a significant delay in Congress acting on that legislative language," he said.

Since bombing began against the terror group last August, Obama has claimed authority to use force under the 2001 Authorization for the Use of Military Force, or AUMF, used by former President George W. Bush following the Sept. 11, 2001, terror attacks to justify military action against al-Qaeda militants.

But the Obama administration have argued that the fight against ISIL requires new authorization. "I call on this Congress to show the world that we are united in this mission by passing a resolution to authorize the use of force against ISIL," Obama said in his State of the Union address earlier this year.

The push for new authorization comes as the U.S. confirmed Tuesday the death of 26-year-old American aid worker Kayla Mueller who had been held hostage by ISIL.

Earnest said the new authorization will be more powerful "if it has bipartisan support" in Congress.