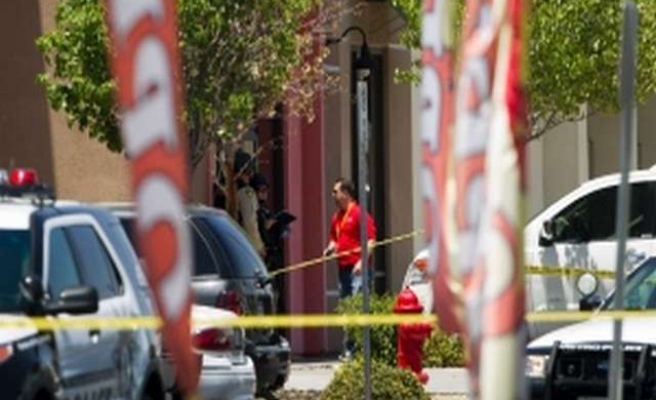 A married couple who shot dead two Las Vegas police officers in a weekend pizza parlor ambush harbored anti-government and white supremacist ideology and threw a swastika on the body of one of the officers they gunned down, police said on Monday.

The couple are believed to have acted alone on Sunday when they killed the lunching policemen before heading to a nearby Walmart, where they killed a bystander who tried to stop them. Later, surrounded by police, 22-year-old Amanda Miller shot and killed her 31-year-old husband, Jerad, then took her own life.

"At this time we believe this is an isolated act," Assistant Clark County Sheriff Kevin McMahill told a news conference. "There is no doubt that the suspects have some apparent ideology that's along the lines of militia and white supremacist."

Information about the suspects gleaned from police and social media painted a picture of a pair with increasingly extremist views on government and law enforcement, culminating in an ominous Facebook post a day before the shooting.

"The dawn of a new day. May all of our coming sacrifices be worth it," Jerad Miller wrote on Saturday.

Police said the Millers, who married in 2012 in Indiana, had expressed support in social media for renegade Nevada rancher Cliven Bundy, whose property was the scene of a high-profile April standoff between federal agents and Bundy supporters over a forced round-up of his cattle from public land.

McMahill said investigators were looking into any possible ties between the couple and right-wing extremist groups, as well as any links to the Bundy ranch action, which became a magnet for anti-government militiamen angry over what they viewed as federal overreach.

Bundy's son, Ammon Bundy, told Reuters the Millers had indeed been at the family's Bunkerville ranch, but that militia members asked them to leave because of "radical conduct." He did not know the nature of the behavior that got them ousted or how long they stayed.

"We're working to figure out those details," Bundy said.

Amanda Miller's Facebook page contains photos of the couple dressed as comic book villains The Joker and Harley Quinn, and the Las Vegas Review-Journal reported the couple were known to dress as characters and pose with tourists on Las Vegas' popular Fremont Street area.

Mark Pitcavage, director of investigative research for the Anti-Defamation League, which monitors hate groups, said the Millers appeared to be "right-wing anti-government extremists of the 'Patriot' movement variety, believing in all the common militia-type conspiracy theories."

McMahill said investigators believed they equated law enforcement with the Nazi movement and saw police as oppressors, even as they appeared to subscribe to white supremacist ideology themselves.

"We can hope for peace. We must, however, prepare for war," Miller posted on Facebook earlier this month, without clarifying who he viewed as an enemy. "To stop this oppression, I fear, can only be accomplished with bloodshed."

McMahill said police believed patrol officers Alyn Beck, 41, and Igor Soldo, 31, had been targeted at random by the couple, who confronted them as they ate lunch in a pizza parlor booth.

After shooting the officers, the couple dragged them from the booth and placed a yellow Revolutionary War-era banner bearing an image of a coiled snake and the slogan "Don't Tread on Me" atop Beck's body, McMahill said.

He said they also threw a swastika symbol on Beck's body and pinned a note to Soldo saying the attack was "the beginning of the revolution."

They then grabbed the officers' weapons and fled to the Walmart, where Amanda Miller gunned down a bystander who had tried to confront Jerad Miller with his own concealed weapon after the couple burst into the store shouting: "This is a revolution."

The couple exchanged fire with police and retreated to the rear of the store, where a wounded Amanda Miller killed her spouse and herself, McMahill said. Police found hundreds of rounds of ammunition in their possession.