White US officer sacked for assault on black student 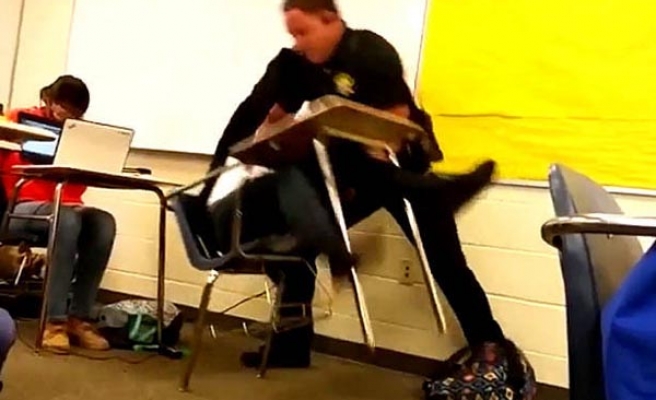 A South Carolina school resource officer was sacked Wednesday after videos emerged showing him slamming a black female student to the ground in a classroom, according to local officials.

Richland County Sheriff Leon Lott said Senior Deputy Ben Fields had been fired from the force because he did not follow police regulations during the incident at Spring Valley High School.

"He should not have thrown the student,”  Lott said, who added that the images made him want to "throw up" when he saw the videos.

Three videos filmed by fellow students and published on social media show Fields, who is white, grabbing the student as she sits at her desk, flipping her and the desk, and eventually pulling her backwards to the floor.

Local media said the student had refused to put away her mobile phone and then refused to leave the classroom prior to the incident.

The videos prompted national outcry and a civil rights investigation by the FBI and U.S. Justice Department.

The incident came at a time of heightened scrutiny of U.S. police use of force against blacks.

Fields who as been in his post sice 2008, previously had at least two lawsuits filed against him as an officer, according to local media. He also received a Culture of Excellence Award last November while serving at a separate school, national media reports.

School resource officers are employed by local law enforcement agencies and have responsibilities similar to those of police officers.