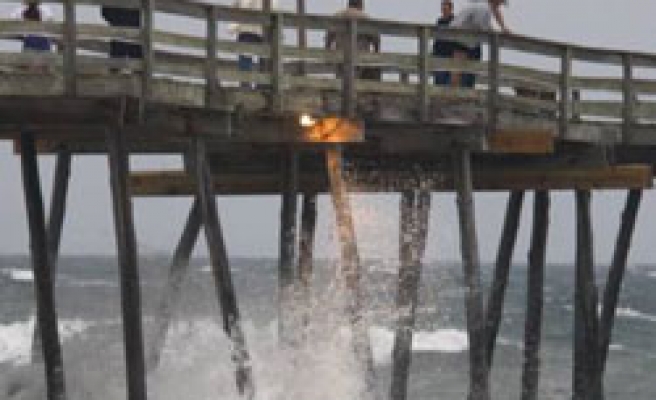 Hurricane Earl battered North Carolina's coast with rain, winds and waves on Friday and swirled up the U.S. eastern seaboard toward New England and Canada as a weakened but still dangerous storm.

The impact of the Category 2 storm appeared to be less than originally expected as Earl churned north parallel to the U.S. Atlantic coast hours after it was downgraded from a Category 4 hurricane.

Local emergency officials said no casualties or major structural damage had been reported so far. At least one coastal road was cut by waves washing over it.

"Certainly conditions are not as severe as they could have been," said Sandy Sanderson, the director of emergency services in Dare County.

At 2 a.m. EDT (0600 GMT), Earl was packing top sustained winds of 105 miles per hour (165 kph) and its center was passing east of the Outer Banks islands that jut into the Atlantic, the U.S. National Hurricane Center said.

A slight further weakening was forecast during the next 24 to 36 hours but Earl was expected to remain a large hurricane as it turned toward the northeast and headed for southeastern New England, which it would approach on Friday night.

Offshore buoys at varying distances off the Outer Banks recorded waves as high as 26 feet (8 meters) and even 35 feet (10.7 meters).

Exxon Mobil said it had pulled nonessential staff from its Sable field in offshore Nova Scotia.

At least 100,000 people were ordered to evacuate from North Carolina's Outer Banks islands as Earl approached the Atlantic shore. It was one of the biggest storms to menace the state since Hurricane Floyd killed more than 50 people in 1999.

The U.S. Census Bureau estimated 26 million people in coastal counties from North Carolina to Maine could feel Earl's effects in the next two days.

While a direct U.S. landfall was not expected, Earl is forecast to spin northward along the coast during the Labor Day holiday weekend marking the end of the summer vacation season.

Forecasters warned hurricane-force winds from Earl still extended out 70 miles (110 km) from its center, so it would not necessarily require a direct landfall to inflict damage from strong wind and high seas.

On North Carolina's Ocracoke Island, charter boat captain Ryan O'Neal, 31, said he was staying put with his dog despite an evacuation order. He spoke as the last ferry off the island, accessible only by boat, left on Thursday morning.

"I've been here for every hurricane since I was born. This one may be bad, but I'm sure we've had worse. I've got to watch out for my house and boat," O'Neal said.

Watches and warnings were in effect along the Atlantic coast for North Carolina, Virginia, Maryland, Delaware, New Jersey, New York, Connecticut, Rhode Island, Massachusetts, Maine and parts of Canada's Nova Scotia and New Brunswick provinces, alerting residents that hurricane and tropical storm conditions were possible in the next day or so.

Few vacationers were visible along Main Street in Hyannis, normally one of the busiest towns in the Massachusetts beach community of Cape Cod, which is expected to feel the storm on Friday.

"We were tempted to leave, but I think we'll stick it out," said John Tracy, 58, of Newport, New York, who was in town to visit his daughter.

"People need to be rapidly completing their preparedness now," Fugate said. "Don't wait for the forecast every six hours and think it's going to get better."

Cars lined up to get off the island resort of Nantucket off Cape Cod and hundreds of boats were removed from its main harbor. Smaller ferry line back-ups were seen on Martha's Vineyard, the island that recently hosted the Obama family's summer vacation and is home to many celebrities.

No storm has threatened such a broad swath of the U.S. shoreline -- the densely populated coast from North Carolina to New England -- since Hurricane Bob in 1991.

Behind Earl, Tropical Storm Gaston dissipated in the central Atlantic. There was still a chance it could regenerate as it moved west toward the Caribbean Sea, but it was too early to tell whether it would enter the energy-rich Gulf of Mexico.