At least 10 members of the Presidential Guard, the force loyal to the Palestinian president, have been killed in an attack by Hamas fighters near Gaza's Karni crossing with Israel. 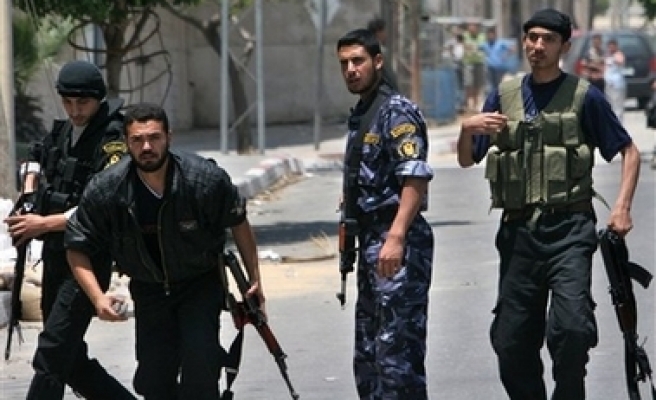 At least 10 members of the Presidential Guard, the force loyal to the Palestinian president, have been killed in an attack by Hamas fighters near Gaza's Karni crossing with Israel.

Al Jazeera's correspondent said Hamas men were accused of attacking the guards' training base near the crossing in a fifth day of factional fighting on Tuesday.

The fighting, on top of the resignation of Hani al-Qawasmi, the interior minister, is the first major crisis facing the unity government set up between Mahmoud Abbas's Fatah movement and Hamas.

One Palestinian man was also killed by Israeli soldiers in response to the fighting.

Colonel Ali Qayssi, of Fatah, said that dozens of members of a Hamas paramilitary force and the faction's military wing, the Izz al-Din al-Qassam Brigades, fired grenades and anti-tank fire on the camp of 200 guardsmen.

A spokesman for the Hamas paramilitary, the Executive Force, which is controlled by the interior ministry, denied its members were involved.

Earlier on Tuesday, a fighter from the Izz al-Din al-Qassam Brigades was shot dead and another Hamas supporter wounded in Gaza City, medics and witnesses said.

Another Hamas loyalist was wounded when fighters opened fire near a checkpoint controlled by national security, a service dominated by Fatah loyalists.

Seventeen Palestinians have been killed in factional fighting since Sunday and more than 60 wounded, dealing a major blow to the unity government just two months after it was formed.

Another blow to the administration was al-Qawasmi's resignation which has left Ismail Haniya, the prime minister, assuming responsibility for the interior ministry until a replacement is found.

In a bid to clamp down on the street fighting, Haniya is expected to convene a meeting of commanders on Tuesday to discuss a prospective security deployment. Last Mod: 15 Mayıs 2007, 16:06
Add Comment