During the opening session, Senegal was elected chairman of the OIC Bureau, while Egypt, Turkey and Palestine were elected vice chair, and Malaysia as rapporteur. 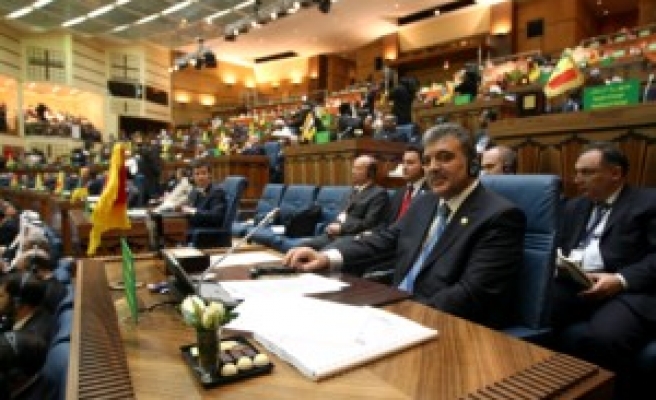 Dr. Abdul Hamid Bin Pawanthe, President of the Malaysian Senate whose country headed the 10th session, said his country had no doubt that the OIC would see greater success under the chairmanship of Senegal and wished it well in carrying this "heavy responsibility."

He thanked the OIC secretary general for his excellence and cooperation with Malaysia during its tenure, saying that his country was privileged to have headed the organization in 2003-2008.

The representative said the OIC's Secretariat and system had to be revitalized to make it more efficient, and thus could only be achieved through the adoption of a revised charter.

"We must make the OIC relevant to the 21st century's era of globalization," he stressed.
Pawanthe recounted the many initiatives that were taken by the OIC under Malaysia's leadership, including the strengthening of the organization's economic relations, the development of infrastructure projects, and the establishment of the World Islamic Economic Forum (WIEF) "to provide a platform for business interaction." The Fourth WIEF will be held in Kuwait, he noted, and hoped to see proactive participation of member states in this forum.

Another initiative was working to establish a Zakat (alms) fund, he said.

"We cannot afford to be left behind," he warned, and called for bridging gaps and overcoming misunderstandings with other cultures, promoting national development, seeking women empowerment, and "to grow through self-reliance."

On Palestine, the representative said it was the responsibility of the international community to work toward establishing an independent Palestinian state "and the OIC must play a part in this." Pawanthe concluded by reiterating Malaysia's unwavering commitment to OIC causes and principles.

On his part, Senegalese President Abdoulaye Wade said in a speech upon assuming chairmanship of the session that this was not only a Senegalese summit, but was one for all Muslims in Africa, noting that his country, which was hosting the summit for the second time, was aware that this was an exceptional privilege.

He aslo expressed his gratitude for the commitment and diligence of the OIC secretary general in his manner of leading the OIC.

"The renewal of the Islamic ummah (nation) in the 21st century will be achieved through the revitalization of the OIC, and the revised charter meets this demand ... only through reforms can the organization meet these demands," he said.

On Palestine, the president said that "unity is the prerequisite for you (Palestinians) to succeed ... please unite." He said that as chairman of the OIC, the establishment of a Palestinians state and achieving peace between the Palestinians and Israeli will be his priorities, alongside contributing to peace in the Middle East.

As for challenges facing Muslims in the 21st century, he said they included environmental issues and dealing with natural disasters, countering Islamophobia, and the need to create social, economic and cultural partnership dynamics because the Islamic world was "lagging behind" in these areas.

The Senegalese president called for bringing more Arab investments across Africa and proposed the earmarking of two percent of OPEC's oil earnings to the oil for poverty fund every time oil prices went up.

During the opening session, Senegal was elected chairman of the OIC Bureau, while Egypt, Turkey and Palestine were elected vice chair, and Malaysia as rapporteur.