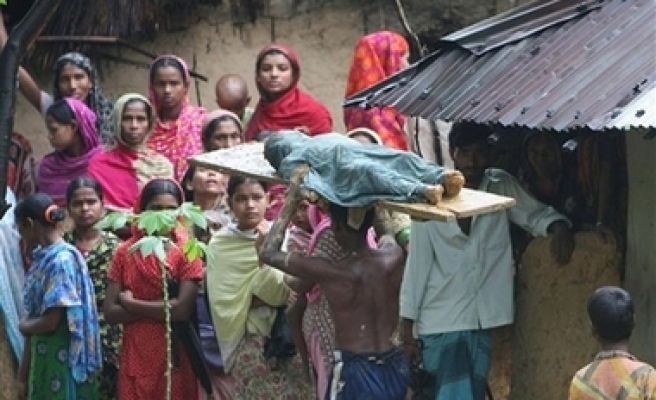 The worst-hit area was the hilly port city of Chittagong, where large chunks of earth slid off the soaked hillsides, burying dozens of crudely built shacks. The death toll in the city increased to 115 Wednesday after 18 more bodies were found, city official Nur Sulaiman said.

Elsewhere, lightning strikes killed 11 people in the neighboring districts of Cox's Bazar, Noakhali and Brahmmanbaria, the Food and Disaster Management Ministry said. The heaviest recorded rainfall levels in seven years also have inundated parts of the capital, Dhaka, and other regions.

On Wednesday, the Gumti River breached an embankment in Comilla district, flooding dozens of villages and forcing several thousand to flee their homes, CSB television station reported. The district is located 55 miles east of the capital.

Bangladesh, a low-lying delta nation of 150 million people, is buffeted by cyclones and floods that kill hundreds each year. A powerful cyclone in 1991 killed 139,000.

Densely populated and grindingly poor, the country is filled with slums that are particularly vulnerable. The one hit in Chittagong was home to 700 people, most of them migrant workers and their families who lived in clusters of straw-and-bamboo or mud-and-tin shanties built on the slope of hill, survivors said.

"There was a sudden rush of mud and water, and our home was swept away," Munshi told The Associated Press by telephone from his hospital bed. Five other neighboring shanties on a slope also were washed away.

Munshi and his mother-in-law, who had left the hut minutes earlier, were the only survivors. Munshi was carried several feet away, and suffered a fractured pelvis and sprained ankles.

"My sons, aged 8 and 10, slept next to each other," he said, recalling the last time he saw his children.

Another victim, an 11-year-old-boy who gave his name only as Belal, said he lost his mother and two sisters.

"My mother asked me get some bricks to stop the rushing water from getting inside our house," Belal said at a military hospital where he was being treated for head and limb injuries. "As soon as I stepped outside, I was carried away by the swirling water — and a huge chunk of earth buried our house."

The country's interim leader, Fakhruddin Ahmed, visited the worst-hit areas, the United News of Bangladesh news agency said. He went to a military hospital where 47 seriously injured victims were being treated and distributed emergency rations to survivors at an army-run relief shelter nearby.

"Our first task is to rescue, treat and help rehabilitate the affected people," Ahmed told reporters.

Many of the dead in Chittagong were buried in rows in hillside graveyards. In addition, officials said as many as 50 people were reported missing.

Many areas remained without power or water because of flooding in the city of 4 million, 135 miles southeast of Dhaka. Several roads remained covered in slippery sludge, and the ground floors of many houses were water-logged, residents said.