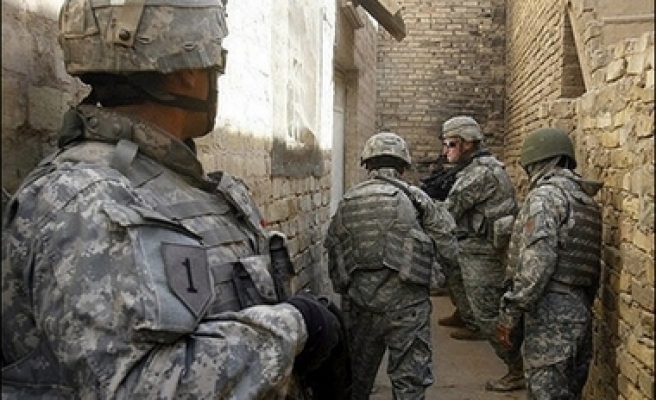 Police said the dead included 11 guards and three of police chief Col. Ali Ahmed's family. The chief was not in the house at the time, police said.

Later in the morning in southern Iraq, a parked minibus exploded at a bus terminal in the town of Qurna, and a hospital director said at least 16 people were killed and 32 wounded.

A witness, taxi driver Salim Abdul-Hussein, 35, said the blast damaged the terminal and many cars and surrounding shops, striking an area crowded each morning with farmers coming to town to shop and sell their produce and animals in Qurna, 225 miles south of Baghdad.

Maj. Gen. Mohammed Hammadi, police chief in Basra, the provincial capital 60 miles to the south, said a minibus loaded with rockets, ammunition, C4 explosives and benzene blew up and caused a nearby car to explode in flames — leading to an early report of two car bombs.

Police cordoned off the area and arrested two Egyptian suspects, he said.

Hammadi said eight people were killed and 28 wounded. Another police source, speaking on condition of anonymity because he was not authorized to deal with the press, said 15 people were killed. At Qurna hospital, director Ali Qassim told The Associated Press by telephone the hospital had received 16 bodies from the explosions and 32 wounded.

In other violence, unknown gunmen speeding by in the northern city of Kirkuk shot and killed a soldier, Adnan Mahmoud, as he drove with his 2-year-old daughter around 6:30 a.m. Friday. The child also was killed, said police Capt. Jassim Abdullah.