A few days before the 40 anniversary of its illegal annexation of Al-Quds (occupied East Jerusalem), Israel unveiled on Sunday, May 13, a mammoth 1.5-billion-dollar plan described by Palestinians as the biggest in its never-ending attempt to Judaize the h 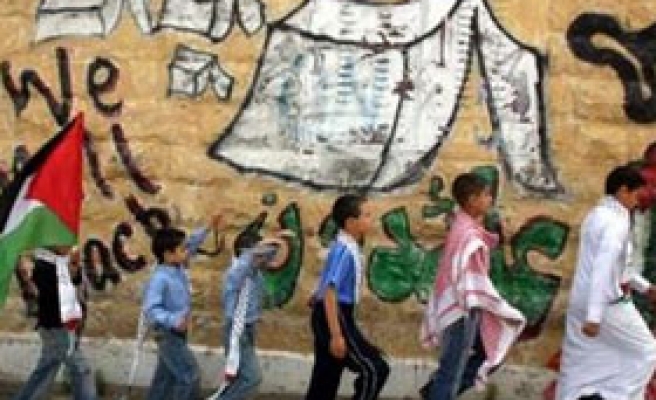 A few days before the 40 anniversary of its illegal annexation of Al-Quds (occupied East Jerusalem), Israel unveiled on Sunday, May 13, a mammoth 1.5-billion-dollar plan described by Palestinians as the biggest in its never-ending attempt to Judaize the holy city.

"We want to assure the economic strength of the city," Ra'anan Dinur, the director general of the Prime Minister's Office, told a Cabinet meeting Sunday, reported Haaretz.

"These measures will greatly assist in achieving this goal."

Israel allocated 5.75 billion shekels (1.45 billion dollars) for a series of plans to solve the social and economic problems of Jewish settlers to encourage them stay in Al-Quds.

Some 200 million Shekels will be given in loans to Jewish workers to start their own businesses while tax cuts would be offered to lure more settlers.

Nearly 320 million Shekels will be paid to NGOs to build headquarters in Al-Quds.

The plan also stipulates relocating all ministries, except the defense, and most government agencies to Al-Quds in the coming 8 years.

The government will finance the settlement of the thousands of employees whose agencies would move into the city.

Germany, the rotating president of the EU, has snubbed an Israeli invitation to mark the 40 anniversary of Al-Quds annexation on Wednesday.

"We believe that Jerusalem's future should be part of the negotiations between Israel and the Palestinians," German embassy sources told Yedioth Aharonoth.

American Ambassador Richard Jones will reportedly not show up.

Jerusalem Mayor Uri Lupolianski said the plan was needed or else Israel would lose control over Al-Quds to the Palestinians.

"The demographic problem is a very difficult one for us. According to statistics, even though we talk about Jewish sovereignty, Jerusalem may not remain for eternity under Jewish leadership and sovereignty."

The Jerusalem Institute for Israel Studies claimed that the number of Arabs in the city grew twice as fast as the Jewish population over the past decade.

"It is an announcement against peace and against the Palestinian state and it means the Israeli government is not a partner for peace," Information Minister Mustafa Barghuti told Agence France Presse (AFP).

"I consider this a dangerous Israeli escalation in conjunction with the latest announcement that 20,000 housing units will be built."

Israel unveiled on Thursday, May 10, plans to build three more Jewish settlements, with more than 20,000 housing units, in East Jerusalem.

The international community has long urged Israel not to change the identity of the holy city till its final status is defined through negotiations with the Palestinians.

Since the occupation of Al-Quds, Israel has adopted a series of oppressive measures to force the Palestinian out, including systematic demolition of their homes.

Israeli authorities do not issue building permissions for Palestinians who are also banned from renovating their house unless with an Israeli permit, which they rarely get.

There are also special IDs for Palestinians living in the Al-Quds without which they would be prevented from entering the holy city.

Despite Israeli plans to create new political and demographic realities, the Palestinians maintain that the holy city will be the capital of their future state.

Al-Quds is home to Al-Haram Al-Sharif, which includes Islam's third holiest shrine Al-Aqsa Mosque, and represents the heart of the Arab-Israeli conflict.