Some 15,000 Thai troops were on alert Tuesday across the country as security fears rise ahead of a court decision whether to dissolve the kingdom's two largest political parties. 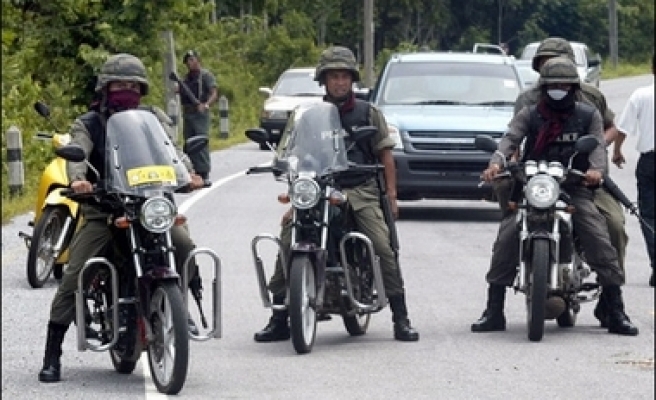 Some 15,000 Thai troops were on alert Tuesday across the country as security fears rise ahead of a court decision whether to dissolve the kingdom's two largest political parties.

The verdict, which will be read out Wednesday, could plunge Thailand's political system into disarray and has raised concerns for unrest.

The troops have been stationed in their barracks, waiting to deploy if the security situation deteriorates, said Colonel Sunsern Kaewkumnerd, Council for National Security (CNS) spokesman.

"We will assess the situation after the court delivers its verdict and combine that with our intelligence gathering before we stand the troops down," he told AFP.

Thailand's Constitutional Tribunal must decide whether Thai Rak Thai (TRT), the party formed by ousted prime minister Thaksin Shinawatra, and the Democrat Party are guilty of a slew of charges of electoral fraud related to annulled elections in April last year.

If the parties are found guilty the tribunal has the power to dissolve them and ban their executives from politics for five years.

The potentially divisive ruling comes after more than a year of political upheaval culminating in the September 19 coup against Thaksin.

The junta which seized power has promised to hold a referendum on their new constitution ahead of planned elections by December.

But analysts say dissolving Thailand's main parties could cause chaos, and fears of violence in Bangkok have prompted warnings that the junta could resort to "an emergency decree" if necessary.

Some 900 police will also be deployed throughout Bangkok on Tuesday evening, protecting the Constitutional Tribunal offices and setting up checkpoints to deter party supporters from traveling to the capital from the provinces, officials said.

"Police who deploy at checkpoints will also search for possible bombs and firearms," said Police General Wichian Potphosri of the National Police Office.

An additional 900 police will also be put on alert, he said.