The 15th Anniversary Summit of the Black Sea Economic Cooperation (BSEC) Heads of State and Government was held in Turkish metropolis of Istanbul with a meeting of foreign ministers of BSEC countries on Monday. 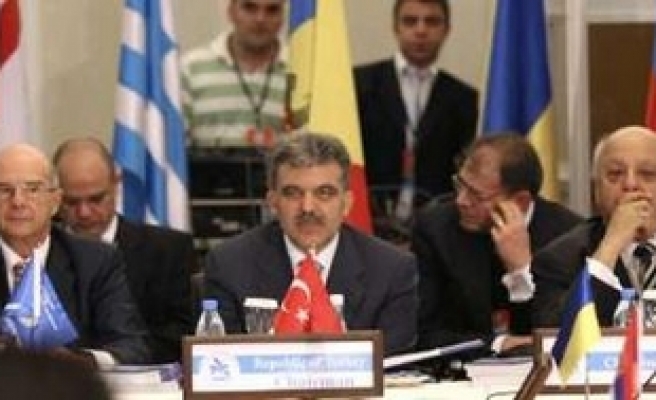 An activity schedule covering many areas has been prepared for the Black Sea Economic Cooperation (BSEC) during the presidency of Turkey, and these activities will contribute to rapid development of the organization, said Leonidas Chrysanthopoulos, the Secretary General of the International Permanent Secretariat of the BSEC, on Monday.

This declaration will cover not only strategies of BSEC, but also welcome the ongoing reform process, he stated when referring to the draft declaration of the BSEC 15th Anniversary Summit to be presented by foreign ministers to the heads of state and government of BSEC countries for approval.

According to Chrysanthopoulos, this declaration will also symbolize the beginning of BSEC-EU relations.

Chrysanthopoulos stated that the first informal BSEC-EU Troika meeting, to take place later on Monday, is the indicator of improving relations between the two organizations.

The Council of Ministers of Foreign Affairs (of BSEC) will adopt a resolution which will give "observer status" to the European Commission, the Secretary General added.

"Black Sea has united us for centuries, and we are in contact with each other today through it (Black Sea)," Armenian FM Vartan Oskanian said on Monday.

"We should make use of this opportunity. But, water is sometimes so deep that we prefer to stay on the shore," he stated.

Oskanian appreciated economic activities of BSEC, however argued that the organization cannot fully make use of the political potential.

"We think that our relations with the EU are of strategic importance," said Azerbaijani FM Elmar Mammadyarov on the other hand.

"Therefore, we think that establishing a more developed cooperation and closer dialogue between the two organizations is also important," he emphasized.

Claiming that there are threats against cooperation and development in Black Sea, Mammadyarov said, "we can particularly show regional conflicts as an example for this. Armenian and Azerbaijani armed forces are coming face-to-face with each other in the region. And when these norms and principles, and international law and state principles are considered, I believe that a comprehensive regional cooperation can be created especially in the South Caucasus."

"EU's joining us as an observer is a positive development. BSEC basin is one of the most rapidly developing regions in the world. If required economic development is ensured in this region, it will contribute more to Europe's security, and it can assume significant roles in preventing international human and arms trafficking and proliferation of weapons of mass destruction," said Georgian FM Gela Bezhuashvili.

"BSEC is important for Europe, and it will continue to be so as it is situated on the energy route," Bezhuashvili stated.

"BSEC, which will create a very important chain between the EU and Central Asia, is facing security threats," Bezhuashvili pointed out and added that regional disputes should be overcome by a comprehensive cooperation.

Speaking at BSEC's Special Meeting of the Council of Ministers of Foreign Affairs in Istanbul, Kalfin said BSEC region has been an emerging and developing region and current BSEC members have achieved noteworthy transformations in terms of adopting free market economy.

Stating that these were milestones for several BSEC countries to join the EU, Kalfin said the region is important for Eastern Europe and the Caucasus considering its strategically outstanding location that covers transit countries for energy resources.

Kalfin said there are still some major problems in the region such as, human trafficking, and BSEC countries should overcome these problems through mutual trust and cooperation.

On the other hand, Moldovan Foreign Minister Andrei Stratan stressed that all BSEC countries will benefit from this summit declaration to achieve outcomes of the organization activities in Black Sea region.

Serbian Foreign Minister Vuc Jeremic said Monday that situation in Kosovo is unstable and basically poses threat to the stability of international system when it is considered as a case under dispute.

Speaking at BSEC's Special Meeting of the Council of Ministers of Foreign Affairs in Istanbul, Jeremic said there are disputed border zones between several countries in the region.

Pointing to Kosovo case, Serbian FM said developments regarding Kosovo's independence could sometimes cause risks. He said Serbia undertakes a supportive role regarding the settlement of the dispute.

On the other hand, observer country Ukraine's Foreign Minister Arseniy Yatsenyuk said that new difficulties have arisen in BSEC region.

Noting that they are in favor of EU's "observer status" at BSEC, Yatsenyuk said free trade zones should be set up in the region.

He also said double taxation problem should be resolved, investments should be encouraged and a legal infrastructure should be established among BSEC countries to boost trade relations, underscoring that commercial measures would mitigate disagreements between BSEC countries.

Another observer country representative, Belarusian FM Valeriy Voronetsky, said they believe that a closer cooperation should be maintained --without any border lines-- by considering geographical and historical ties.

The meeting of Council of Ministers of Foreign Affairs of the Black Sea Economic Cooperation (BSEC) within the framework of the 15th Anniversary Summit of the organization ended in Istanbul on Monday.

Speaking at the meeting, U.S. Ambassador to Turkey Ross Wilson highlighted importance of the Black Sea region with its population of 350 million, and said that they appreciated the BSEC's reforms and efforts to improve its relations with the EU.

Wilson said that the United States made a financial contribution of 10 million USD to the Black Sea Fund for development of rule of law, democracy and cooperation in the region.

At the end of the meeting, a memorandum of understanding regarding the Black Sea Way Agreement was signed.