Local authorities said that the three-storey building collapsed after an explosion which was believed to be caused by a LPG canister. 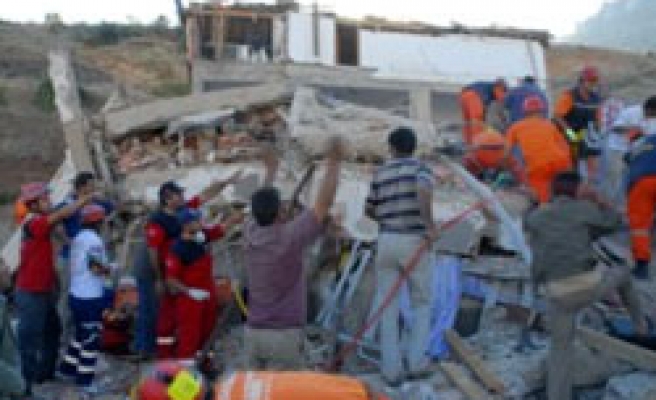 Turkey's interior minister said on Friday that 17 people died and 27 were wounded after a building collapsed in the central Anatolian province of Konya early on Friday.

Expressing his sorrow over the incident, Atalay told reporters that the wounded students were currently under treatment.

Local authorities said that the three-storey building collapsed after an explosion which was believed to be caused by a LPG canister.

"There may still be 10-15 students under the rubble," Aydin also said.

Ten of the injured were hospitalized in Konya, and others were sent to hospitals in several towns of this central Anatolian province.

Efforts are under way to rescue other students who were trapped under the debris, local authorities also said but they didn't give exact number of students staying in the dormitory.

They said there might be at least 35 up to 50 students in the dormitory.

Merve Avci, a 13-year-old student who is one of the survivors of a collapsed building said that she felt the flames rising from the basement to the top floor of the building.

"Before the explosion, I heard one of our teachers saying that a gas hose was not attached to its proper place in the kitchen," Avci said.

Avci said that she then smelled gas coming from the downstairs to the upper floors, and then a strong explosion occurred.

"I was in the uncollapsed part of the building with five of my friends immediately after the explosion, and we felt flames rising from the downstairs to upper floors," she said.

Also, some municipal authorities and people living in the vicinity said that there were no large LPG canisters inside the dormitory, but there was a system operating with gas.

Hasan Kucukkendirci, the health director in Konya, told AA correspondent that this was one of the three students that health teams had established a contact under the debris.