Twenty beheaded bodies were discovered Thursday on the banks of the Tigris River southeast of Baghdad, while a parked car bomb killed another 20 people in one of the capital's busy outdoor bus stations. 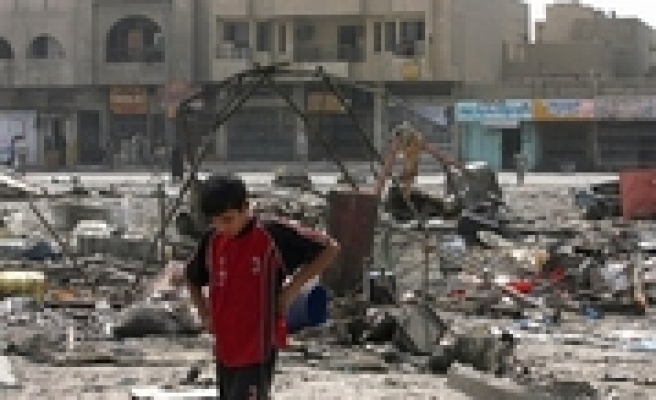 The beheaded remains were found in the Sunni Muslim village of Um al-Abeed, near the city of Salman Pak, which lies 14 miles southeast of Baghdad.

The bodies — all men aged 20 to 40 years old — had their hands and legs bound, and some of the heads were found next to the bodies, two officers said on condition of anonymity because they were not authorized to release the information.

Meanwhile, a parked car bomb ripped through a crowded transport hub in southwest Baghdad's Baiyaa neighborhood at morning rush hour, killing at least 20 people and wounding more than 50, another officer said on the same condition.

Many of the victims had been lining up for buses, awaiting a ride to work. Some 40 minibuses were incinerated in the explosion, police said.

A pickup truck rumbled slowly away from the scene, with two pairs of legs — the dead bodies of victims — dangling out of the back.

Sporadic clashes had been under way in the Salman Pak area for several days, between Interior Ministry commandos and suspected insurgents, the Kut officer said. It was unclear whether the discovery of the bodies was related to the recent fighting.

Salman Pak and its surrounding area has been the focus of new U.S. military operations to oust suspected al-Qaida fighters from the Baghdad's outskirts. American forces launched a drive into Salman Pak and neighboring Arab Jabour two weeks ago.

At the time, ground forces commander Lt. Gen. Raymond Odierno said U.S. troops were heading into those areas in force for the first time in three years.

In other violence Thursday, three mortar rounds slammed into a popular shopping district in central Baghdad, killing three pedestrians, police said. The attack damaged shops in the Shorja market area and wounded 14 people, an officer said on condition of anonymity as he was not authorized to talk to media.

It was unclear whether the mortars were aimed at the Shorja shopping area, or whether they fell short of an intended target. In recent months, tall security barriers have been built around popular marketplaces in Baghdad, preventing car bombers from entering. However, mortars can be lobbed over such blast walls.

In Nasiriyah, about 200 miles southeast of Baghdad, local police said two suspected militants were killed early Thursday when the bomb they were planting near a house of a U.S. translator detonated prematurely.

The bomb exploded near the soldiers' vehicle late Wednesday southeast of Basra, Iraq's second-largest city, the military said in a statement. Another soldier was wounded in the blast and remains in stable condition at a military hospital, it said.

The death raised to at least 154 the number of British troops killed in Iraq since the war began in March 2003.

Britain has withdrawn hundreds of troops from Iraq, leaving a force of around 5,500 based mainly on the fringes of Basra, 340 miles southeast of Baghdad. The U.S. currently has about 155,000 troops in Iraq.

On Wednesday, outgoing British Prime Minister Tony Blair said his country would withdraw even more troops within weeks, but he refused to set a more specific timetable.