Some 200,000 houses had been destroyed or damaged. More than 800,000 people have been affected by the floods from heavy rains and overflowing rivers and dams in Pakistan. 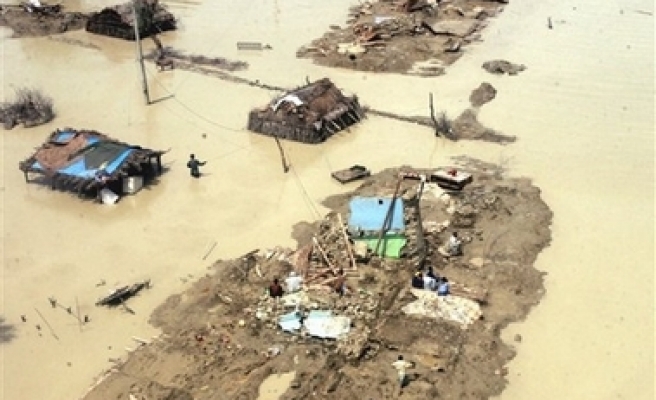 Many fled to rooftops or high ground to escape the floodwaters that inundated large areas of Baluchistan province after Cyclone Yemyin. Monsoon storms also killed more than 120 people in India.

In Pakistan, provincial relief commissioner Khubah Bakhsh estimated that some 200,000 houses had been destroyed or damaged. More than 800,000 people have been affected by the floods from heavy rains and overflowing rivers and dams, he said.

In one of the hardest-hit areas, the city of Turbat and surrounding villages, the first relief supplies only began arriving some 48 hours after the cyclone hit, prompting the mayor's resignation and residents' protests.

From a helicopter, an Associated Press reporter saw the tops of palm trees protruding from vast sheets of water in some areas. In others, people, cows and goats were stranded on rooftops, without water or food in 109 degree heat.

"We need tents, food, medicine. All the resources we had are already exhausted. The response from the provincial and government has been poor. In protest I have handed in my resignation," said Abdul Rauf Riand, mayor of Turbat, city of some 150,000 people.

He estimated that about 100,000 people in the urban area and surrounding villages had been stranded.

Hafiz Tahir, a district officer, said casualties could go over 100 but it would be impossible to determine the death toll until the waters receded.

Tahir said there was no trace of a wedding party of 50 people, mostly women and children, who were on their way to Turbat when the flooding began.

The army said it had evacuated more than 600 families in the water-ringed city. These included 36 from the rooftop of a mosque who were lifted by harnesses into two hovering helicopters.

In a separate rescue operation, 35 Chinese workers at the seaport of Gwadar were ferried to higher ground, said Navy Rear Admiral Mahmood Khan. A number of Chinese have constructed facilities at the port.

Located to the east on the same Arabian Sea coastline, Karachi suffered torrential rains and thunderstorms, which killed at least 228 people Saturday. City authorities continued to grapple with electricity shortages caused by power lines that were snapped by falling trees, pylons and billboards.

Navy warships and helicopters have rescued at least 125 crewmen from floundering craft, the navy and Maritime Security Agency said.

The cyclone struck the coastline of Baluchistan on Tuesday, killing at least 12 people, said Raziq Bugti, spokesman for the provincial government in an earlier report.

Bakhsh said an accurate, updated death toll was not possible because telephone service was cut in remote areas.

NATO troops and Afghan police rescued 42 trapped villagers Wednesday and four people died in another province Tuesday when a river overran its banks.