Hajji Emirali Ablayev, the Mufti of the Crimean Moslems, held the service of Friday prayers in the local mosque on 15, August. 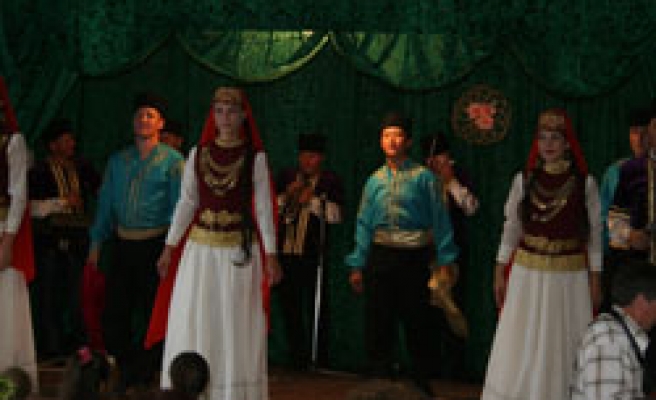 On 15-16, August, the celebaration events devoted to the 20th Anniversary of the settlement in village by the Crimean Tatar repatriates took place in Sarıbaş village of the Curçi (Pershotravne) rayon. At the time, on 15th of August, 1988, 40 Crimean Tatar families came from former places of exile to then Tanino village, and the mass construction of the houses was begun in the village. Afterwards these families initiated to establish their village council, and after that, rename village to Sarıbaş.

Moreover, this celebration is dated to 225th Anniversary of foundation of Sarıbaş as like populated area. The ethnic homogeneousness of this village is its uniqueness since this is one of few villages where the Crimean Tatars consist 90% of population. Furthermore, Sarıbaş became as a first village of joint settling of the arrived Crimean Tatars. Then Crimean leadership planned to found such villages for the Crimean Tatar repatriates in the steppe part of Crimea. Two such villages were founded in Crimea in all: Sarıbaş village of the Curçi (Pershotravne) rayon and Libnehtovka village of the Mayak-Salın (Lenin's) rayon.

The first mayor of Sarıbaş, Ahtem Tippa made every effort so that village would become as model of a planned return of the Crimean Tatar people to own Motherland. At that time, the club and obstetrical-first aid station were built in village. This village numbered about 300 families.

The USSR collapse, economical crisis in Ukraine caused the complete exodus of people. Some inhabitants demolished own houses amd moved to more successful parts of Crimea.

Now there are 200 families in Sarıbaş (about 1000 persons). Many villagers occupy themselves with farming. There is the school in village where about 100 pupils are studing. The kindergarten to 16 children was recently opened. The village club is working. In addition, the village mosque was built. 23 weddings were celebrated in village this year and 13 children will go into the first form.

The celebration lasted two days in village. Hajji Emirali Ablayev, the Mufti of the Crimean Moslems, held the service of Friday prayers in the local mosque on 15, August. The solemn part of celebration was held in the village club on 16, August. Mr. Remzi Havaci, the Permanent Representative Deputy of the President of Ukraine in the ARC, Mr. Refat Çubarov, the 1st Chairman Deputy of the Majlis of Crimean Tatar people, the leadership of the Curçi (Pershotravne) rayon also paricipated in the celebration. The representatives of the authorities gave the presents to the village community: computer, heater, lighting fittings and microphones.

The village inhabitants were gladdened by the concert of the State Folk Group Qırım from Aqmescıt (Simferopil).