Archaeologists in Greece have discovered a rare 2,700-year-old piece of fabric inside a copper urn from a burial they speculated imitated the elaborate cremation of soldiers described in Homer's "Iliad." 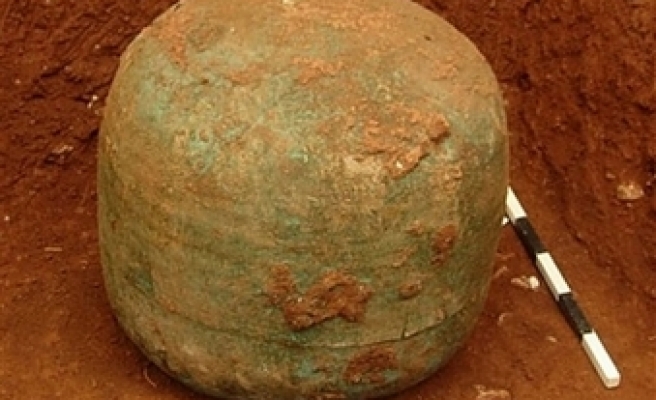 Archaeologists in Greece have discovered a rare 2,700-year-old piece of fabric inside a copper urn from a burial they speculated imitated the elaborate cremation of soldiers described in Homer's "Iliad."

The yellowed, brittle material was found in the urn during excavation in the southern town of Argos, a Culture Ministry announcement said Wednesday

"This is an extremely rare find, as fabric is an organic material which decomposes very easily," said archaeologist Alkistis Papadimitriou, who headed the dig. She said only a handful of such artifacts have been found in Greece.

The cylindrical urn also contained dried pomegranates — offerings linked with the ancient gods of the underworld — along with ashes and charred human bones from an early 7th century B.C. cremation.

Papadimitriou said the material was preserved for nearly 3,000 years by the corroding copper urn. "Copper oxides killed the microbes which normally destroy fabric," she told The Associated Press.

Conservation experts from Athens will work on the fragile find.

"Our first concern is to save it," Papadimitriou said. "Afterward, it will undergo laboratory tests to tell us about the precise fabric and weaving techniques."

The burial was the only cremation among a half-dozen closely grouped graves found on the plot, which was scheduled for development.

"Cremation was very unusual in Argos, and this too makes it a special find," Papadimitriou said. "In my opinion, an affluent citizen may have wanted to imitate a funerary custom described by Homer to stand out among his peers buried nearby — who were not cremated."

The poet's "Iliad" and "Odyssey" enjoyed huge popularity throughout Greece. Composed during the 8th century B.C, and thought to be inspired by a war four centuries earlier, the Iliad describes slain heroes being cremated in elaborate funerals, which fell out of fashion in later times.

Modern Argos in the northern Peloponnese, some 90 miles south of Athens, is built on top of one of the most famous cities of ancient Greece. Also named Argos, the ancient city was mentioned by Homer as the seat of a Mycenaean hero-king who fought with the Greek army in Troy. It flourished throughout antiquity. Last Mod: 10 Mayıs 2007, 22:12
Add Comment