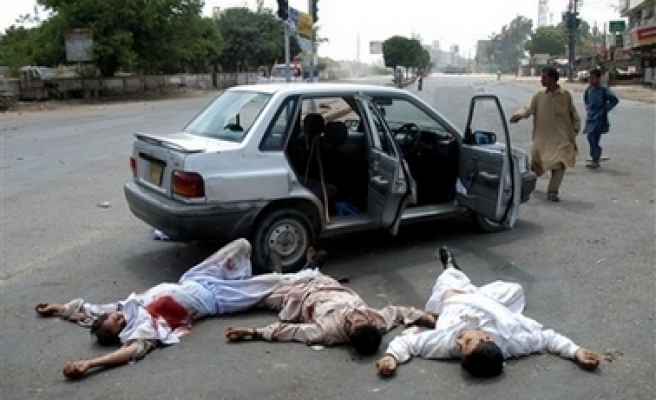 The political violence in Pakistan's largest city, Karachi, was the worst in years. Musharraf, a vital U.S. ally, triggered growing protests by suspending the country's most senior judge in March.

Gunmen with assault rifles traded fire among bungalows and concrete apartment blocks in the city of 15 million, a major port and home to Pakistan's stock market. Shipping containers and immobilized trucks blocked streets, and men brandished rifles and handguns against a backdrop of burning cars and buses.

The attacks trapped ousted Chief Justice Iftikhar Mohammed Chaudhry at the Karachi airport, unable to attend what organizers hoped to be the largest rally yet calling for Chaudhry's reinstatement and for Musharraf to step down.

Musharraf loyalists insist that the president remains popular despite resentment of his alliance with the Bush administration to pursue al-Qaida.

But simmering resentment has been unleashed by Musharraf's removal of Chaudhry, who had a reputation for challenging government misdeeds. Critics accuse Musharraf of removing Chaudhry to protect the president's plan to seek a new five-year term. The government maintains Chaudhry was ousted because he had abused his office.

Opposition members accused the pro-government Mutahida Qami Movement of launching the attacks, saying that as they attempted to greet Chaudhry at the airport, they were attacked by MQM members with batons and guns. The MQM is a coalition partner in both Sindh province, of which Karachi is the capital, and in the federal government.

Officials said a security force of 15,000 was deployed in the city. But there was no sign of intervention in the violence and the opposition accused authorities of least tacitly approving the bloodshed.

An AP reporter saw MQM supporters calling for ammunition and firing from buildings, apparently at opposition supporters who fired back.

Just a half a mile from the airport, gunmen with assault rifles traded fire in a residential area where streets were blocked by shipping containers and immobilized trucks, and gunfire left several activists lying in pools of their own blood.

In another district, a private TV network came under fire but stayed on the air as rioters torched vehicles outside.

Hospital officials said Sunday that the death toll from the violence had risen to 36.

Musharraf appealed for calm and insisted he would not declare emergency rule.

"If you really feel sorry over what has happened in Karachi, then stop these protests," he said in a speech late Saturday to about 50,000 supporters in the capital Islamabad, called to demonstrate the strength of his support.

Speaking from a pulpit topped with protective glass windows near the federal parliament building, Musharraf said a judicial panel was examining Chaudhry's case, and the presidential vote by lawmakers and parliamentary elections would go ahead as planned at year's end.

He blamed "elements who tried to create turmoil by politicizing" Chaudhry's suspension — a clear reference to opposition parties.

Some analysts argue that sustained unrest will eventually prompt Musharraf's fellow generals — a key constituency in a country that has seen three periods of military rule since independence from Britain in 1947 — to withdraw their support.

That could lead to anything from a fresh coup to Musharraf's withdrawal, followed by elections and the restoration of full civilian rule.

The escalation in Karachi, which has a history of political and ethnic violence, leaves Musharraf and his allies open to charges that they are stoking confrontation — perhaps with a view to imposing martial law and postponing the vote.

"It was a state-sponsored massacre, and the sitting regime is to be blamed for it," said Babar Awan, a senior lawmaker for exiled former Premier Benazir Bhutto's party.

The exiled leader of MQM, Altaf Hussain, blamed Chaudhry for the violence, saying he should have heeded warnings from officials to stay away from Karachi.

In a speech by telephone from London to supporters gathered in a Karachi square, he said it was his party that was attacked. But urged the crowd to "control your emotions and demonstrate peace." Last Mod: 13 Mayıs 2007, 10:42
Add Comment