From among posters and movies, I am writing to you. Al Jazeera Channel has begun its third International Documentary Film Festival, held in Doha, Qatar, between April 23 - 26, 2007, aiming at better cooperation and understanding among peoples and cultures 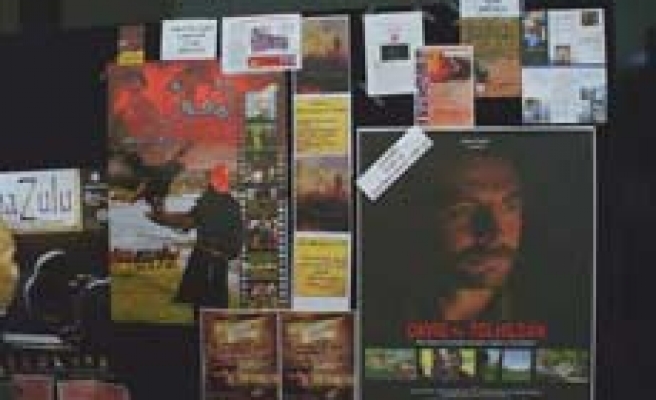 The competition is between four kinds of documentary films:
1. Short (less than 30 min.)

More than one hundred films are being screened in the festival, competing for the Aljazeera Golden Award and the Jury's Award.

It is hard to describe what is utterly fascinating about a documentary. I am really stricken by the movies displayed here; life is reflected through images, faces, and voices.

Palestine, Iraq, the US, China and South Africa; all these countries and others I have now visited, getting closer to their peoples while sitting in my chair in front of the magic large screen.
In my short talk with him, the director of Mona Lisa From Sarajevo, Prof. Bato Cengic, told me that "documentary films are to open reality and to interpret some kind of realistic approach to everyday life." That's exactly what I have gained from all the movies I have watched in the festival.

Voices From Inside is Lucy Marten's movie that depicts Israel from the other side, through the eyes of its people who support human rights and fight against apartheid. Marten is successful in tackling this angle. The movie features 16 Jewish Israeli voices, each of which is part of a different Israeli peace movement. Through their eyes, the film traces the evolution of Zionism through conscious and brutal honesty.

Rashed Radwan, an Iraqi director, participated in the festival with his masterpiece Target: Heart of Iraq. The movie takes us inside an armed group operating in northern Iraq to confront them with this dilemma: Where is the border line between resistance and terrorism?

The assassination of John F. Kennedy is the premise of Rendezvous With Death. Seven weeks before the assassination of Kennedy, Lee Harvey Oswald, commonly believed to have been the asssassin, traveled to Mexico. He met with high-ranking officers of the Cuban secret service. The movie questions: Was this meeting related to the assassination? It is a big production film directed by Wilfried Huismann. Arno Schumann, one of this film's co-producers, said it took from them more than three years to research and almost one year to shoot the movie.

The audience was divided into two parties; one side opposed the scenes depicting abuse and bloodshed, the other fully supported such a depiction; they found these movies one of the tools that opened up our eyes and enabled us to see life as it really is.
Invitation

You are invited to watch excerpts of three of the participant films, to be displayed on IslamOnline.net upon the (co-)producers' permissions, starting on next Monday: